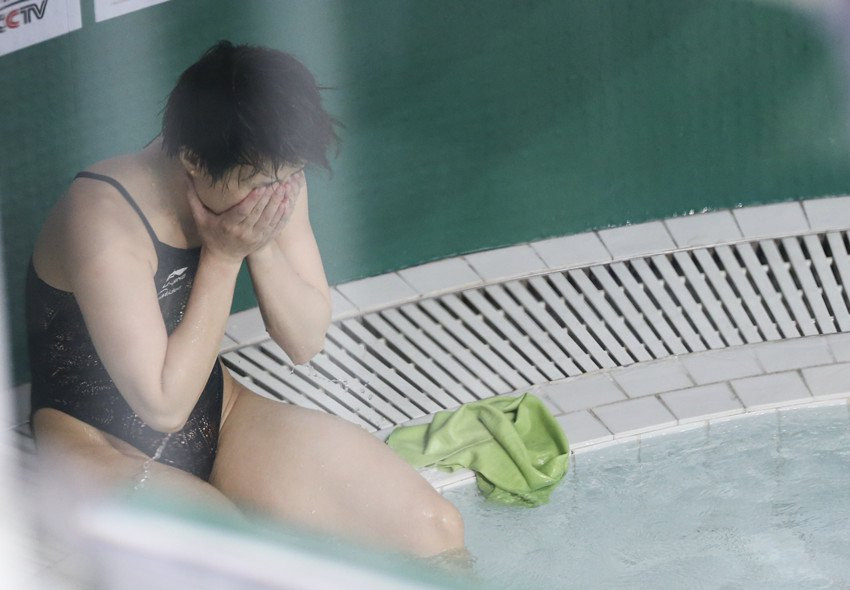 But the hosts' domination was maintained as they took all three golds on offer to bring their total to seven out of seven titles so far, with Shi's rare lapse allowing long-time friend and new synchro partner Wang Han to take the three metres springboard glory.

"It was a pity that I did not perform my best today," said Shi, who won 3m springboard individual and synchro gold at the Rio 2016 Olympics and 2017 FINA World Championships before adding the individual title at last year's Asian Games.

"Every dive was not as clean as usual.

"The failure made me upset but I want to congratulate Wang Han.

"She did a pretty good job today.

"I am not afraid of failure, but I need to learn from the lesson since I have not failed for many years."

She added: "It is a good thing to lose from time to time.

"I will learn from today's loss.

"I don't want to bear the pressure that I cannot make any mistakes.

"I accept the failure and the gold medal today does not belong to me.

"It is better to take the loss earlier than later."

Wang said she always has a special feeling competing at the Water Cube.

"The Beijing Olympic Games was held in this venue, so I cherish every opportunity I have to compete at the Water Cube," said Wang, a mixed synchro world champion.

"I was happy with the gold medal but not satisfied with my performance even though I claimed the victory."

Meanwhile double Olympic champion Cao Yuan celebrated his third title in what will be the last major event held at the Water Cube before it is transformed into the Ice Cube to host curling at the Beijing 2022 Winter Games.

Cao secured victory in the men's 3m springboard with six stable dives for a winning total of 541.95 points, adding to the two synchro titles he won yesterday in the 3m springboard and 10m platform.

"I was lucky to receive my third gold in front of the home crowds," he said.

"I just had six smooth dives, no perfect ones and no big mistakes."

World champion Xie Siyi had to accept silver following poor fourth and sixth dives, totalling 527.90, while Jack Laugher of Britain took the bronze on 457.55, beating Rommel Pacheco of Mexico by 0.45.

China's new pair of Chang Yani and Yang Hao won the final event of the day, the mixed 3m springboard, with 315.21.

Francois Imbeau-Dulac and Jennifer Abel of Canada took silver with 304.08 ahead of Britain's Tom Daley and Grace Reid, who totalled 294.39.