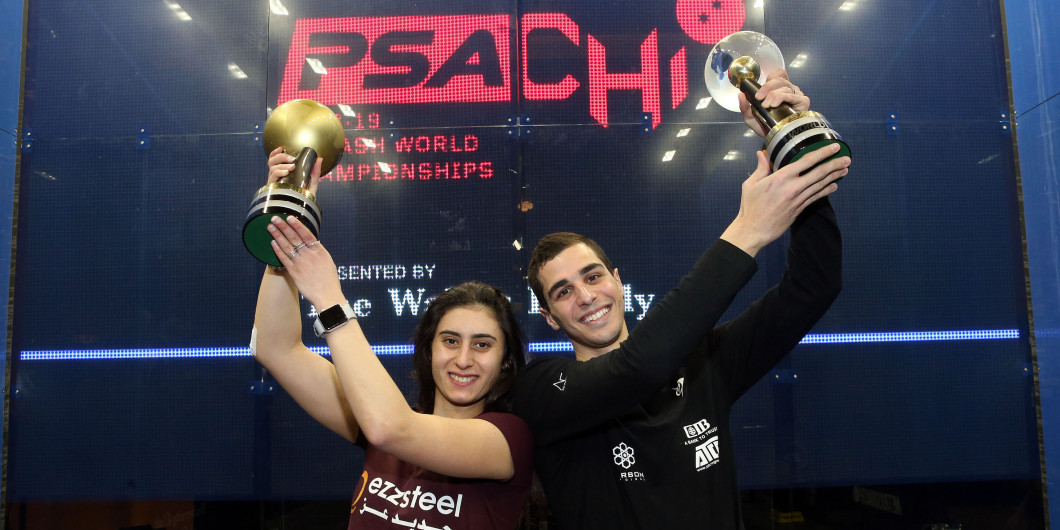 Ali Farag and Nour El Sherbini were crowned as champions after all-Egyptian finals today at the Professional Squash Association World Championships in Chicago.

It meant a maiden global title for the 26-year-old who will replace fellow Egyptian Mohamed Elshorbagy as the world number one.

Farag's day had mixed feelings, however, as his wife Nour El Tayeb was beaten by El Sherbini in the women's final.

She joins Malaysia's Nicol David, New Zealand's Susan Devoy and Australian duo Sarah Fitz-Gerald and Michelle Martin as the only players to have claimed a treble of crowns.

Both men's finalists were appearing in the showpiece game for the first time.

"As I stand here today, I can't help but think about the road I've taken to be here," said Farag.

"If, five years back, you had told me that I would be standing here holding the World Championship trophy, then no chance would I have believed you.

"As a senior at college, I never thought about going pro and the main driving force behind it is Nour.

"It sounds like a cliché, but find someone who lifts you up day in and day out, I'm deeply blessed to have her in my life, and she is the one who pushed me to go pro.

"Winning the World Championships is one thing, but winning it in front of this crowd is something else."

Prize money was equally split between men and women.

"I think I'm out of words," said El Sherbini.

"The last two games were really close and she was coming back.

"I think she likes it like that, she was a little bit tense in the first two games and then she started to relax.

"I was trying to focus point after point and I'm really happy of course.

"It was a really tough tournament for me, and a lot of things happened before I came here and behind the scenes.

"But I'm really glad that I came because one of the options was that I wouldn't be able to come.

"I was improving match after match, and I had a lot of tough matches in the earlier rounds, but I'm really glad that I managed to get everything together this week."