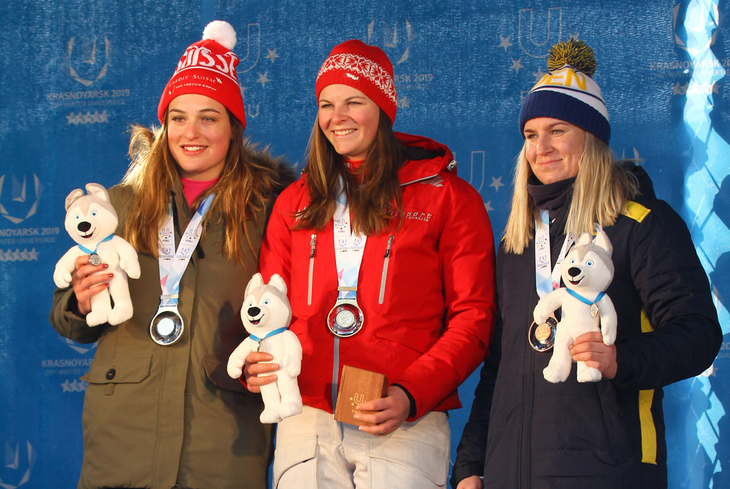 Alpine skiing powerhouse Austria were able to celebrate the first title awarded at the Funpark Bobrovy venue in Krasnoyarsk.

Gfrerer was one of only three skiers to dip below the one minute mark in the super-G competition.

She achieved a time of 58.44 seconds in only the third run of the event.

Gfrerer's early start left her waiting to see if she had done enough to emerge as the winner of the event.

The Austrian was ultimately confirmed as the champion.

Her nearest challenger proved to be Switzerland’s Amelie Dupasquier, with the 19-year-old ending in 59.53.

The podium was rounded off by Sweden’s Fanny Axelsson in 59.70.

Swiss success came in the men’s competition as Zippert proved the fastest in the field, although little separated the top contenders.

The Swiss skier was joined on the medal rostrum by his team-mate Yannick Chabloz, who won bronze in 57.33.

Hosts Russia earned the first snowboard title of the Universiade, with Pyeongchang 2018 Olympian Kristina Paul emerging as the winner.

Paul, who was forced to compete as part of the Olympic Athletes from Russia delegation at last year’s Olympics owning to the fallout from Russia’s Sochi 2014 doping scandal, had topped qualification yesterday.

She impressively negotiated the early rounds of competition at the Sopka Cluster venue.

Paul produced a dominant run in the final as she hit the front of the four rider race early on and stayed clear until the finish.

Silver was earned by her compatriot Aleksandra Parshina, while Audrey McManiman came through to take Canada’s first medal of the Universiade by winning bronze.

Canada would not have long to wait for another medal as Will Malisch emerged as the winner of the men’s event.

He came across the line in a comfortable first place, having emerged unscathed from tussling with his rivals in the opening stages.

Russia’s Daniil Dilman and Japan’s Yoshiki Takahara slid over the line together, with the duo vying for silver.

Dilman was ultimately shown to have crossed the line in second place, leaving Takahara with bronze.