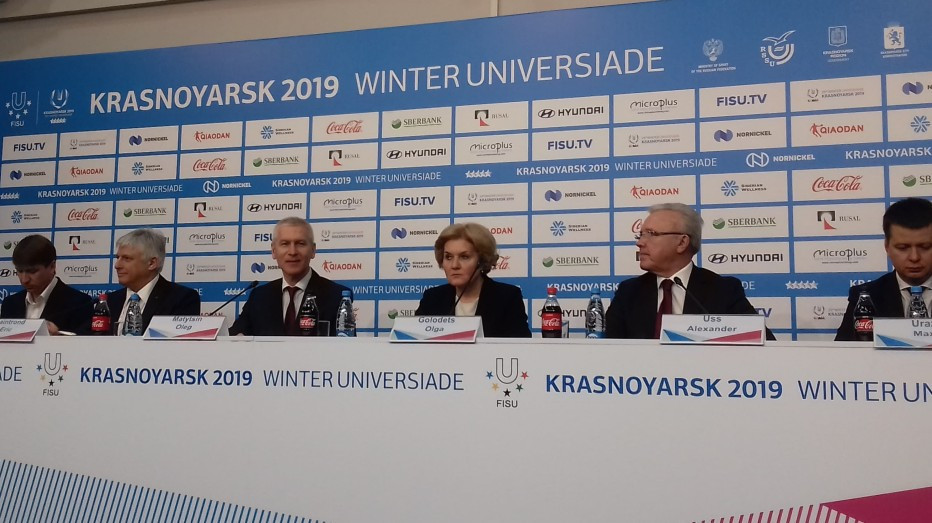 Matytsin was speaking at the opening press conference of the Universiade prior to the official start of Krasnoyarsk 2019 tomorrow in the Siberian city.

Competition has already begun in bandy and ice hockey with preliminary matches being held today.

With preparations now at a close, Matytsin claimed the city of Krasnoyarsk is ready, with athletes and local residents primed to embrace the opportunities presented by the Unviersiade.

"We are now in a great city and we believe the competition will bring great joy to students," he said.

"We are confident the Universiade will run well and the federations located here have played a key role in preparations.

"We have seen new sport venues and infrastructure built.

"People here will benefit from the legacy and will show how we can build the relationship between sport and a city.

"Our mission is to educate students through sport and we hope they will collaborate with each over during the Universiade."

Alexander Uss, the Governor of Krasnoyarsk and President of the Siberian Federal University, was also present along with Organising Committee secretary general Maxim Urasov.

The Universiade was hailed by Golodets as one of the most important events held by Russia and outlined how residents would benefit from changes brought about by hosting.

This includes several sporting facilities built for the Universiade, as well as a new bridge and university facilities.

"We have had spent six years to present the Universiade," Golodets said.

"We have built venues and social infrastructure to boost the city.

"The city receives a new hospital and a new university campus.

"We understand several venues will go to the Federal university, as well as becoming recreational facilities.

"We believe the Universiade will beat the record for the most countries participating, with 59 expected to compete.

"We believe this will become a holiday for university athletes and act as a celebration."

Uss claimed that Krasnoyarsk 2019 had benefited from the experience of officials in Moscow and Kazan in preparing for the Universiade, with the two cities having hosted a series of major competitions.

All construction efforts were handled by local workers, with the skills obtained deemed a legacy for those involved.

Urasov added that he hoped the Unviersiade could act as a springboard for Krasnoyarsk to host further sporting competitions in the future.

The city is currently experiencing a shift in temperature, having experienced lows of between minus 35 and 40 degrees Celsius in recent weeks.

Warmer temperatures in the last week saw a suggestion raised that there could be a lack of snow for competition.

This was dismissed by Matytsin, who confirmed their technical teams had provided assurances the conditions were of the international standard required for competitions to be held.

Ski orienteering and bandy are making their debuts at the Universiade.