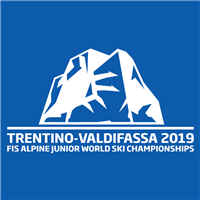 Suter's success helped Switzerland to win the Marc Hodler Trophy for best team performance, with the nation topping the medal table with three golds, three silvers and a bronze.

"I love this slope," she said.

"I'd already won it twice in the European Cup and I knew that if I would have skied well I could get a great result.

"Winning a junior world title is great, the race was excellent, the track was demanding and the fact that the whole Swiss team did so well makes the day really memorable.

"Now all that's left is to grow and collect something important, even in the World Cup."