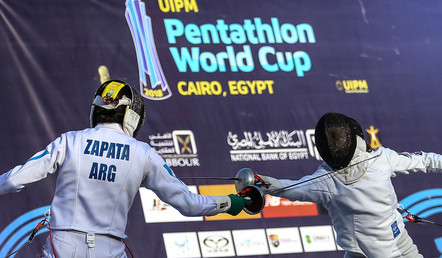 Competitors on the International Modern Pentathlon Union World Cup circuit will be hoping to make the best possible start to the campaign when Cairo in Egypt hosts the first event of the season this week.

The competition in the Egyptian capital, which is hosting a World Cup for the sixth year in a row, begins with women's qualifying tomorrow and concludes on Sunday (March 3).

It is considered one of the more unpredictable events on the UIPM's calendar owing to the difficult temperatures faced by competitors.

In the last five years, the 10 individual gold medals have been shared between eight countries.

The competition in Cairo will offer the first set of World Cup points of the season as athletes continue their preparations for next year's Olympic Games in Tokyo.

The Platinum Club venue recently held the African Championships, which forms part of the qualification process for Tokyo 2020.

In the women's event, Anastasiya Prokopenko of Belarus comes up against Annika Schleu of Germany, who she defeated to win gold at the World Championships in Mexico City last year.

Men's world number two and 2018 world silver medallist Valentin Prades of France will be one of the favourites in their event along with Rio 2016 Olympic silver medallist Pavlo Tymoshchenko of Ukraine.