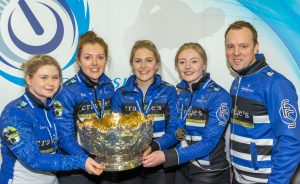 Scottish Curling has announced a rink led by Sophie Jackson will attend the World Women's Curling Championships having overturned a decision to send a team led by Eve Muirhead.

Jackson’s team had secured an 11-7 victory over Murihead’s rink in the final of the Scottish Championships in Perth last week to claim the national title for the first time.

She had also earned two victories over Muirhead’s team during the round robin stage of the tournament.

Muirhead had previously won the tournament on seven occasions.

Scottish Curling, however, opted to send the team led by Muirhead, an Olympic bronze medallist at Sochi 2014, to the World Championships.

The decision to send the 2013 world champion and two-time European Championship gold medallist was reportedly due to Jackson’s team being committed to compete at the Winter Universiade in Krasnoyarsk in Russia.

The Universiade is due to take place from March 2 to 12.

The World Women's Curling Championships are scheduled to begin four days later at Silkeborg in Denmark.

Scottish Curling claimed Jackson's participation at the Universiade presented a challenge to them competing at the World Championships but have now reversed their decision.

"Team Jackson had previously committed to represent Great Britain at the World University Games as their priority goal for the season and this gave a challenge regarding preparation for playing at the World Championship," a Scottish Curling statement read.

"Team Jackson sought a review of the situation regarding their representation at the World Championships.

"This has been a complex issue to resolve and we did not want to rush the judgement.

"The Scottish Curling Board has supported Team Jackson and found in favour of Rule C.12(b) 'The winning team shall represent Scotland in the World Curling Championship', which supersedes all other considerations.

"We would like to thank our members and all those involved for their patience during this time.

“We wish Team Jackson the very best of luck at the Championship, we are in no doubt that they will be exceptional ambassadors for Scottish Curling."

Jackson now looks set to head a team of Sophie Sinclair, Milli Smith and Naomi Brown for the World Championships, scheduled to be held from March 16 to 24.