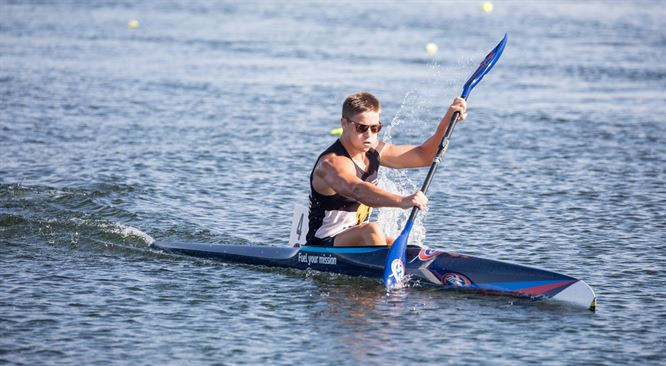 With the Oceania Championships doubling up as New Zealand's National Championships, Reiser won his first individual national title by triumphing in the men's K1 200m.

He finished 0.6 seconds ahead of compatriot Kurtis Imrie to do so, winning in 35.88sec.

Imrie took the silver medal in 35.94, while fellow New Zealander and four-time Olympian Steve Ferguson claimed the bronze with 36.43.

"I’ve been in surf lifesaving and kayaking for ten years and I’ve never won an individual national title.

"I knew I was paddling well but the boys were too.

"I had one of my best starts, it was nice to have held starts here and to be in a stable boat.

"I knew it was close across the finish line, but I thought I had got it."

He got his second gold medal of the day in the K2 200m alongside Karl McMurtrie, the duo winning in 34.42.

Alex Fort and Steven Drabble were in second, followed by Ethan Moore and Toby Brooke, with the New Zealand canoeists finishing in times of 35.17 and 35.52 respectively.

They finished more than a second clear of compatriots Jake Koekemoer, Dylan Neal-Hill, Ben Duffy and Daniel McDowell, who took the silver medal in 34.49.

Australia's Jo Brigden-Jones and Jaime Roberts won the gold medal in the women's K2 200m final with a time of 37.39.

Double Olympic champion and home favourite Lisa Carrington led the qualifiers for the women's K1 200m final, due to be held tomorrow.