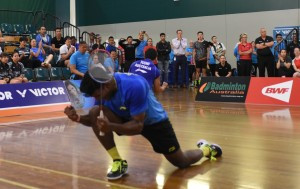 Defending champions Abhinav Manota of New Zealand and Australia's Wendy Chen Hsuan-yu progressed to the quarter-finals with comfortable victories at the Oceania Badminton Championships in Melbourne.

The top seeds each made light work of their respective opponents on the second day of the event at the Melbourne Sports and Aquatics Centre.

The Taiwanese-born player will go up against Claudia Lam, a 21-8, 21-17 winner over New Caledonia's Johanna Kou, for a place in the semi-finals.

Second seed Louisa Ma joined Chen in the quarter-finals with a 21-15, 21-18 victory against Dgenyva Matauli of New Caledonia.

Electric atmosphere in Melbourne Sports Centres MSAC this morning as the players compete for a place in the quarter-finals! #VOC2019

Check out the highlights from day two of the VICTOR Oceania Junior Individual Championships 2019 ➡ https://t.co/wp8aLM3Yrb

The New Zealander's opponent in the quarter-finals will be seventh seed Peter Yan of Australia, who overcame team-mate Hoe Keat Oon 24-22, 21-17 in a hard-fought contest.

The tournament in Melbourne continues tomorrow.