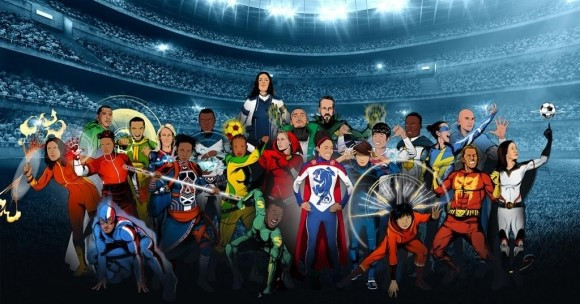 A 23-strong FIFA legends squad has been unveiled by world football's governing body as part of a campaign to promote this year's Women's World Cup in France.

The players on the team, comprised of 13 women and 10 men, are tasked with helping drive attendances at the tournament, generating engagement and inspiring a new generation to play women's football through the initiative.

They are joined by the likes of Scott's ex-England team-mate Kelly Smith, Nadine Kessler of Germany and Canada's Karina LeBlanc.

Each have been given a superhero name and superpower by FIFA.

"The eighth edition of the FIFA Women’s World Cup will be very special and it takes place at a time when women around the globe are uniting to make their voices heard," said FIFA secretary general Fatma Samoura.

"he tournament’s official slogan 'Dare to Shine' echoes the current world movement towards female empowerment and I am looking forward to seeing teams of strong and passionate women, from 24 different countries, illuminate football stadiums in France with their skill.

"Our superheroes will help us to reach a global audience of one billion and make the FIFA Women’s World Cup France 2019 our biggest and best yet - for players, for fans, for local communities and for the empowerment of girls and women."

Our Legends overcame obstacles, fought adversity, and are here to inspire the next generation.

The announcement coincided with the announcement from FIFA that individual match tickets for the tournament are set to go on sale to the general public on March 7.

A total of around 330,000 tickets have been sold so far following the launch of ticket packages and an exclusive pre-sale for Visa customers.

Individual ticket prices will start at €9 (£8/$10) for category four across all group matches except the opening match between France and South Korea in Paris on June 7.

Norway, South Korea, and the 2018 Africa Cup of Nations winners Nigeria will compete in Group A alongside hosts France.

Germany, China, Spain and South Africa were drawn into Group B, and Australia, Italy, Brazil and tournament debutants Jamaica will compete in Group C.