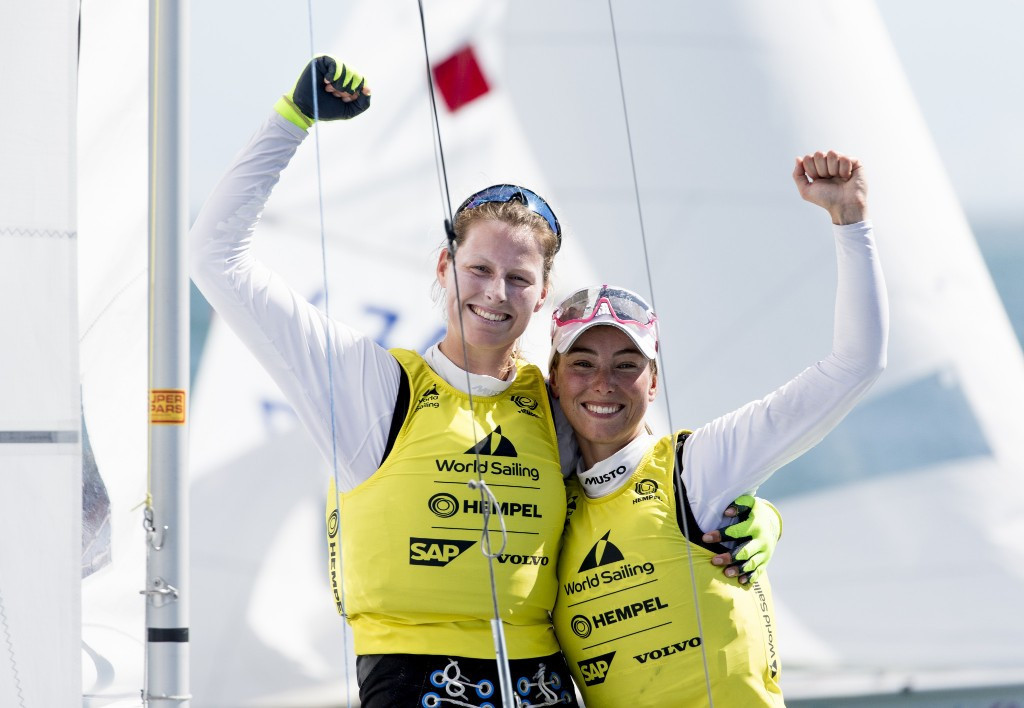 Loewe and Markfort led the fleet going into the medal race, but with fourth place only eight points behind, the duo still had to perform well to ensure a podium finish.

They got off to a bad start, however, with their position for the majority of the race putting them in fourth place overall.

The German pair managed to recover at the leeward mark and slipped past leaders Hannah Mills and Eilidth McIntyre of Britain, alongside Camille LeCointre and Aloise Retornaz of France and Fernanda Oliveira and Ana Luiza Barbachan of Brazil.

LeCointre and Retornaz won the race, with Oliveira and Barbachan second and Loewe and Markfort third.

This was enough to give the German pair gold overall, their first Sailing World Cup medal.

"What a comeback," Loewe said.

"We didn't think it was possible until the very last downwind, close to the gate, really in the last moments."

Jordi Xammar Hernandez and Nicolás Rodríguez García-Paz of Spain took gold in the men's 470, finishing third in the medal race to do so.

💬 Listen back to our 470 Men gold medallists 🥇, @JordiXammar & @nicolas_rdgz_gp 🇪🇸, speaking from the water earlier today.

"We are really happy," said Xammar.

"We had a long pre-season so to be on top of the podium is good for us.

"We were happy with how we sailed before the medal race, but winning and keeping gold ahead of the Swedish team who are one of the best guys in the fleet is really good."

Nine of the ten sailors in the finn race were eligible for a medal, with Sweden's Max Salminen triumphing after coming fifth.

Finland's Oskari Muhonen won the race to secure a silver medal, while Luke Muller of the United States finished fourth and took bronze, the host country's first medal of the competition.

China's Dongshuang Zhang won gold in the laser radial event, with Paige Railey then getting the US's second medal of the day after she secured silver.

The gold and silver medal in the laser event had already been decided prior to the final race, with Herman Tomasgaard of Norway dominating to claim gold and New Zealand's Sam Meech taking silver.

With only one podium place to fight for in the medal race, Olympic champion Tom Burton of the US eventually emerged with the bronze.

Today's action concluded the World Cup in Miami, with the third round taking place in Genoa in Italy from April 14 to 22.