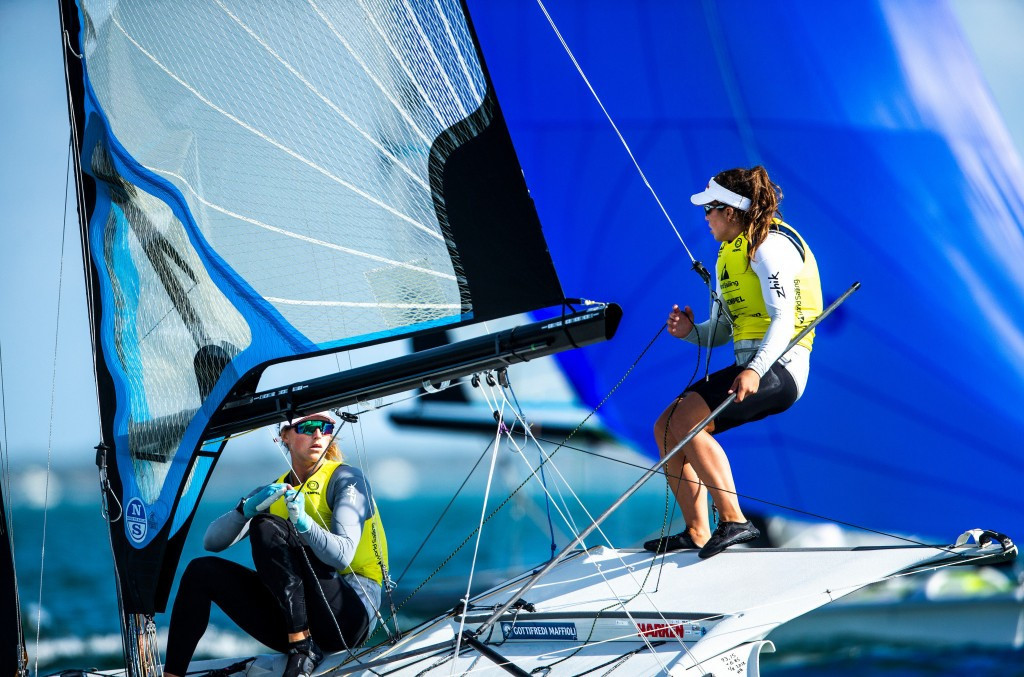 New Zealand's Alexandra Maloney and Molly Meech have extended their lead in the 49erFX event at the Sailing World Cup in Miami.

Maloney and Meech now lead the 49erFX fleet by 12 points, finishing 14th, seventh and second in today's races to do so.

Britain's Charlotte Dobson and Saskia Tidey have been pushed down from second to third after second, 19th and 10th place finishes.

With fourth place a further 20 points behind, the podium following tomorrow's medal race has all but been decided.

Germany's Erik Heil and Thomas Ploessel have also maintained their lead in the 49er event, with the duo able to discard a 24th place finish as their worst result of the competition.

The Olympic bronze medallists won their other race of the day.

Britain’s Dylan Fletcher-Scott and Stuart Bithell remain in second after finishing 11th and 16th, while their compatriots James Peters and Fynn Sterritt rose up to third with a second and 13th place finish.

In the men's 470, Sweden's Anton Dahlberg and Fredrik Bergström now lead by four points due to finishing in eighth and third today.

Japan's Naoki Ichino and Takashi Hasegawa moved up to second after winning the day's second race, while Spain's Jordi Xammar Hernandez and Nicolás Rodríguez García-Paz had a successful day with first and fifth place finishes to move into third.

Germany's Fabienne Oster and Anatasiya Winkel lead the women's 470 fleet after maintaining their good level of consistency throughout the competition, with two second place finishes today.

They are yet to win a race but have not finished lower than sixth place.

Fernanda Oliveira and Ana Luiza Barbachan of Brazil won both of today's races to move into second overall, while Hannah Mills and Eilidh McIntyre of Britain have moved down into third following eight and sixth place finishes.

Leader of the men's RS:X fleet, Poland's Radoslaw Furmanski, suffered with disappointing results of 12th and third place finishes but is still ahead of France's Pierre Le Coq.

The women's RS:X event is extremely tight, with only two points separating China's Yunxiu Lu in first and France's Charline Picon in third.

Israel's Katy Spychakov is in second.

The 49er, 49erFX and RS:X medal races is now due to take place tomorrow, with fleet racing continuing for the other divisions.