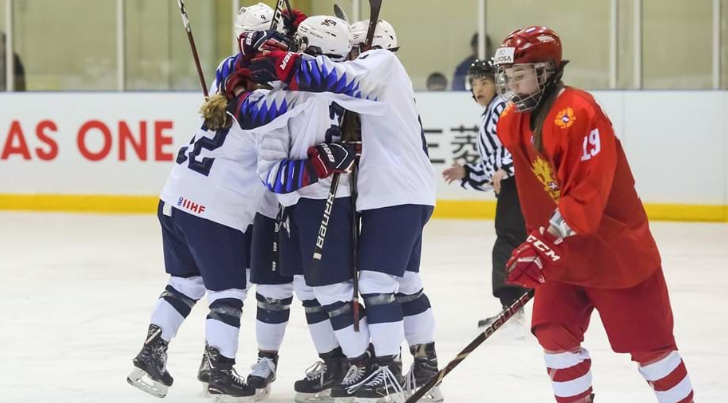 The holders were forced to battle in their opening match of the tournament in the Obihiro Arena, as the Russian team responded to Makenna Webster’s first period strike by equalising through Ilona Markova.

Efforts from Casey O’Brien and Sydney Shearen gave the US a two goal cushion in the second period to put them on course for an opening day win in Japan.

Russia pulled a goal back through Yelena Mezentseva to set up the prospect of a nervy final period of the tie.

No goals were forthcoming in the closing 20 minutes, which allowed the US to celebrate a winning start in Group A.

They joined Canada at the top of the standings, after their fellow North Americans secured victory in the opening match of the tournament.

Daniella Calabrese and Danielle Serdachny were both on target for Canada as they clinched a narrow 2-1 win over Sweden.

The Canadian team are hoping to respond to the disappointment of last year’s event, where a semi-final elimination to Sweden saw them miss out on the gold medal match for the first time.

Canada and the US are now well placed to secure a direct passage to the semi-finals as the top two teams in Group A.

The bottom two teams at the end of the group stage will be forced to play a quarter-final against the best two ranked teams in Group B.

Finland occupied one of the two places, after they edge newly promoted hosts Japan 2-1 in their first match of the competition.

Switzerland joined Finland at the top of the standings, following a 1-0 win over the Czech Republic.

The Czech Republic and Japan will meet tomorrow in a key match, with the loser likely to take up one of the two relegation round places at the end of the group stage.

The teams in the relegation round will then play a best of three series to determine which team is relegated to the second tier.