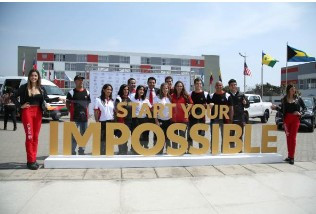 Worldwide Paralympic Partner Toyota has signed a landmark agreement with the National Paralympic Association of Peru (ANPP) which has seen the governing body receive an accessible van and two of its athletes, Pedro Pablo de Vinatea and Carlos Felipa, appointed ambassadors for the Japanese car manufacturer.

De Vinatea has been a driving force behind the development of Para badminton in Peru, winning multiple World Championships medals and Pan American titles in the sport.

In 2013, he was named Peruvian Para Athlete of the Year.

Felipa, a former soldier who lost his left leg in battle, was part of the Peruvian athletics team competing at Rio 2016, taking part in the men’s 100 metres and long jump T42.

This is the latest sponsorship deal Toyota have signed with a National Paralympic Committee having already agreed to support several countries, including Ireland and Sweden.

ANPP President Lucha Villar and Toyota Peru representative Yehude Simon Valcarcel made the announcement at a press conference in Lima.

"This is the first agreement of this type that the ANPP has done in its history; we are achieving something very important," Villar said.

Journalists and Toyota employees had the opportunity to try these two sports with the help of Peru’s national team members.

La Videna is set to be the main competition centre during the 2019 Parapan American Games scheduled to take place in Lima between 23 August and 1 September.

Badminton will be making its Parapan American debut, while goalball will appear in the sports programme for a third consecutive time.

Lima 2019 is expected to feature a record 1,850 athletes competing in 17 sports, two more than Toronto 2015, overtaking the latter as the biggest Parapan American Games ever.