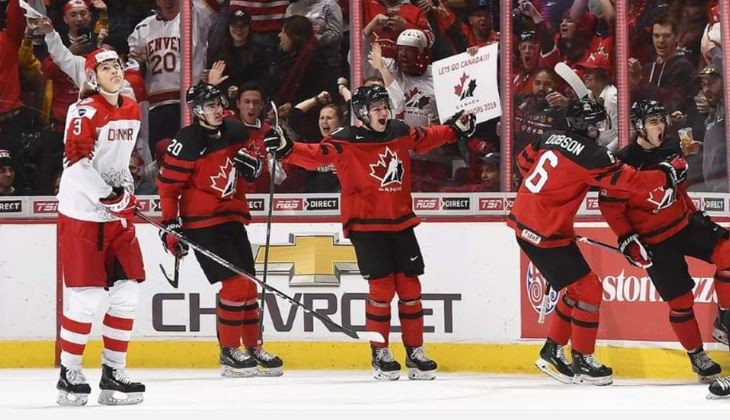 Canada have taken an early lead at the top of Group A with a 14-0 demolition of Denmark in their opening match at the International Ice Hockey Federation World Junior Championships in Vancouver.

The Canadians, who are also the defending champions, saw off their opponents with ease at the Rogers Arena, with their captain Maxime Comtois scoring four goals.

Such a result was widely expected as Canada have never lost to Demark at under-20 level.

"It's the first game of the tournament, so everything is ramped up,” Canada’s Morgan Frost said.

"Everyone was just so excited to get the tournament going.

“We were focused and played really well.

“It was an unbelievable game and something I'll never forget."

Frost himself picked up three goals, with everyone on the team scoring at least one point.

The only other match in Group A today saw Czech Republic beat Switzerland in a much tighter contest, which finished 2-1 after overtime.

David Kvasnicka bagged the vital goal just 52 seconds into added time for a side that has not picked up a world junior medal since 2005 when they claimed bronze.

"It was a pretty tough game for us,” Czech forward Filip Zadina said.

The tight victory sees them gain two points to take second place behind Canada, while Switzerland pick up one to go third.

Russia remain the only team yet to play in Group A and they play Denmark tomorrow.

In Group B, the United States and Sweden each won their matches to get off to the ideal start.

HIGHLIGHTS: The last game of the day ended with a 2-1 win for Sweden's @Trekronorse against the Finnish @leijonat thanks to two PP goals from @BrannstromErik. More from the game: https://t.co/mdlrsZ6T3p pic.twitter.com/RplL9tTf8V

The US beat Slovakia and Sweden saw off Finland by the same 2-1 scoreline.

The US goals came from Evan Barratt and their captain Mikey Anderson, though it was Slovakia who took the lead through Marek Korencik in the second quarter.

"The first two periods didn’t go the way we wanted, but that sometimes happens in the first game of these tournaments.

“We knew it wasn’t going to be easy."

Sweden saw off Finland thanks in part to the undisciplined nature of the Finnish side at the Save-On-Foods Memorial Centre in Victoria.

Sweden’s captain Erik Brannstrom scored both of their goals as Finland racked up seven minor penalties.

Kazakhstan remain the only side yet to play in Group B and they face Finland tomorrow.