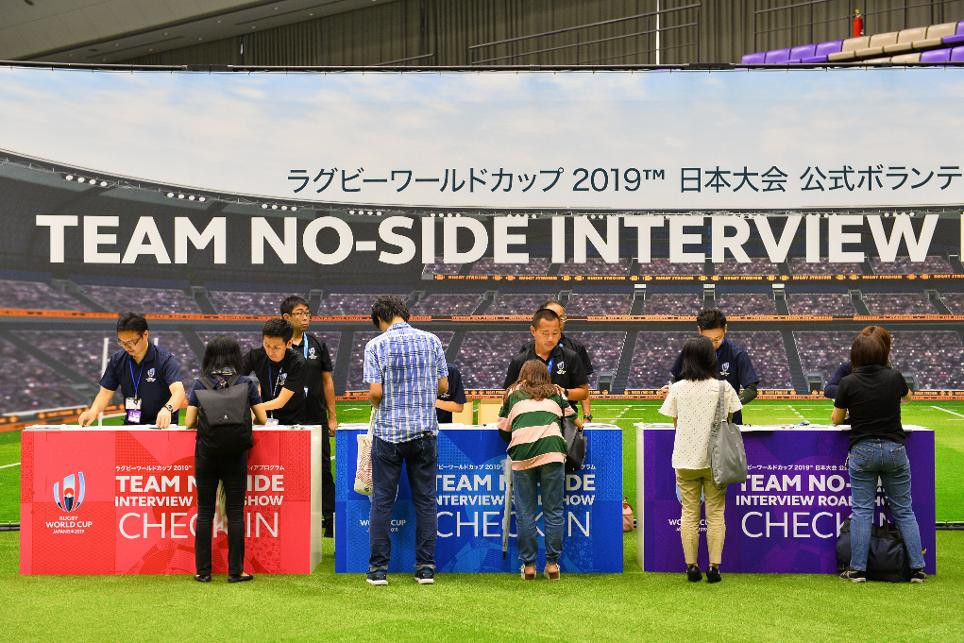 The final round of interviews for the Rugby World Cup 2019 volunteer programme has taken place in host nation Japan.

Thousands of hopefuls were quizzed over five days in capital city Tokyo, with applicants following those who have already been interviewed in the 11 other World Cup host cities.

Volunteers at the tournament will be known as "Team No-Side" with 10,000 positions available in all.

Some will be disappointed as more than 38,000 people have applied for a role.

This is the largest number of volunteer applications for any Rugby World Cup.

"The energy, excitement and positive spirit shown by participants across all of the host cities has been incredible," Deborah Jones, deputy director of the tournament workforce, said.

"To see the transformation of people from when they first arrive for the interview sessions, until when they leave, is truly wonderful.

"We conduct a lot of fun and interactive group activities that encourage communication and team work to demonstrate the type of engagement and interaction we want to see between our volunteers and rugby fans next year.

"As a result of these sessions, we've seen many occasions of people meeting for the first time, sharing contact details, connecting on social media and establishing new friendships."

"No-side" is a rugby term that resonates in Japan.

The term was used by referees to essentially signify the end of a match and has become a symbol of respect, hospitality and solidarity.

The World Cup is due to take place between September 20 and November 2 next year.

A total of 20 nations will take part as New Zealand aim to defend their title.

It will be the first Rugby World Cup in Asia.

"We have reached another great milestone in our preparations for Rugby World Cup 2019 with the completion of our volunteer interviews in Tokyo," Akira Shimazu, chief executive of the Organising Committee, said.

"The response we received for our 'Team No-Side' volunteer programme has been simply incredible in terms of the 38,000 applications.

"The enthusiasm and passion shown by those who have gone through to the interview stages has been really encouraging.

"Our volunteers will be superb ambassadors for both rugby and Japan, welcoming domestic and international fans to this once in a lifetime Rugby World Cup.

"I extend my sincerest gratitude to all of them."