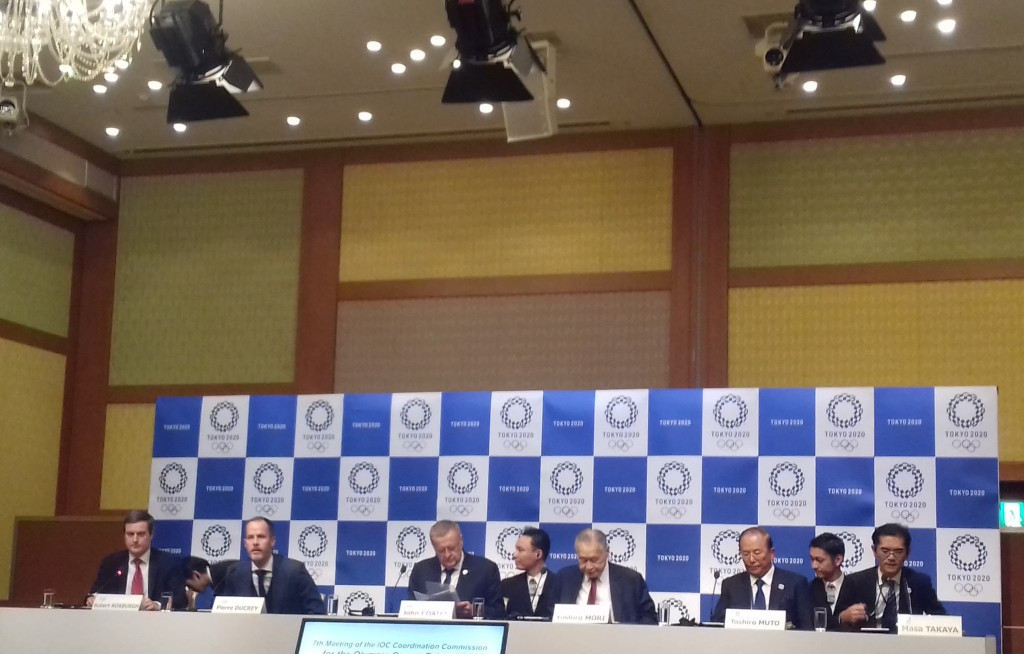 Revised start times for competitions are among measures being introduced to minimalise the potential impact of high temperatures on athletes and spectators at Tokyo 2020, but the efforts could increase the heat on the organisers with costs potentially impacting budget.

Earlier start times for marathon and race walk events in athletics, mountain bike in cycling and sessions in rugby sevens were considered.

Tokyo 2020 President Yoshiro Mori confirmed that the morning rugby sessions had been brought forwards by one hour and a half.

This will see sessions begin at 9am and conclude at midday.

Mountain bike races have been pushed back one hour, with both the men’s and women’s race now set to start at 3pm, rather than 2pm.

A proposal to change the marathon and race walk start times are being considered, with proposals now with the International Association of Athletics Federations (IAAF) for approval.

A start time of between 5.30am and 6.00am was recommended for the marathons by an expert working group set up by the IOC.

The start time approved by the IOC in July was 7.00am.

Mori expressed his hope an agreement could be reached with the IAAF by the conclusion of the year.

Concerns over heat rose this summer when Japan suffered a record heatwave with temperature reaching 41.1 degrees Celsius, which saw at least 96 people died of heatstroke across Tokyo's 23 wards in July.

This raised concerns that similar conditions in 2020 could disrupt the Games, with the Olympics due to take place from July 24 to August 6.

Mori stated that the extreme heat this year and the ensuing public reaction had forced organisers into rethink.

Around 20 preventative measures were put forward by the working group, Coates confirmed, such including water spray and increasing medical resources available in open areas.

The Tokyo Metropolitan Government are also putting in place their own precautions, including non-reflective pacing to reduce heat and increases shaded areas.

Coates warned the measures “are not going to be free”, with the Australian stating the unexpected costs would need to be taken into account when Tokyo 2020 reveal their third budget on December 21.

“The is still some way to go with sponsorships to balance the operating budget, then there is still the ticketing revenue to be achieved,” Coates said.

“I am very confident that it will be a balanced budget.

“This in effect means that the operating costs will not cost the taxpayers anything.

“The Olympic Movement and the Games will provide the revenue for the operating cost, leaving the Tokyo Metropolitan Government and other entities to comprise budget that contributes to venue, which is the legacy.

“It is a very good outcome that I think we will get too.”

Coates acknowledged that there had been some increase and decreases in costs associated with venue overlay, which had not yet been taken into account for the upcoming budget.

He asserted that there had been multi-million dollar savings made by reducing the size of the International Broadcast Centre and reductions the number of levels open to broadcasters at the new National Stadium.

While savings will be made, he asserted, caution would also have to prevail should there be an unseen costs, such as the measures required to combat adverse weather.

Tokyo 2020 chief executive Yoshiro Muto asserted that organisers would aim to not exceed the version two budget when their latest is revealed later this month,

“We are working on the version budget and there are some portions that will be reduced, but there will be some increases,” he said.

“When there was no number we could not incorporate it, but as plans formalise then we can include it.

“We cannot exceed the level from the version two budget, that is our understanding.”

Organisers have continued to receive significant praise from the IOC Coordination Commission, with Coates stating they are on track to deliver a “spectacular Games.”

He noted that 110,000 people had signed up to volunteer for the Games as an example of the interest, with 40 per cent of the figure coming from outside Japan.

Venue construction was found to be on track, while delegates from several National Olympic Committees had reportedly praised progress.