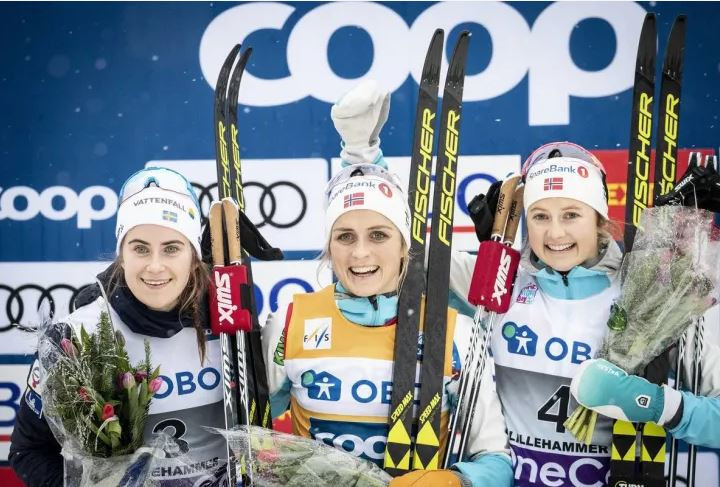 The 30-year-old, who tested positive for clostebol in 2016, has now won two 10 kilometre races on home snow in Lillehammer this weekend after claiming victory in the pursuit today.

Coming home in third was another Norwegian, Ingvild Flugstad Østberg, who battled it out with the Swede all race, but eventually finished just 1.1sec behind.

In snowy conditions a 15km men's race also went ahead today, with Norway taking a clean sweep of the medals.

Throughout the race Toenseth and Roethe often alternated the lead in a bid to stay ahead of the rest, quickly building up a one-minute gap on everyone else.

"We worked together pretty good," Toenseth, who won in 44:13.8, said afterwards.

"Sjur did a great job in the flat in the first loop and I did my job at the top.

"I think because of our good cooperation there it went as it did."

Iversen eventually finished a full 1:03 behind the pair, with Roethe 1.6sec behind the winner.

Taking the gold in Norway was Katharina Althaus, the Olympic silver medallist from Pyeongchang 2018.

The 22-year-old dominated this afternoon's action to win with a total score of 254, 12 points ahead of her compatriot Ramona Straub in second.

Third place was claimed by Austria's former world champion Daniela Iraschko-Stolz, who finished with a score of 241.7.

Althaus started the competition with a jump of 128.5 metres, which placed her in third at the half way mark behind Iraschko-Stolz and her compatriot Eva Pinkelnig, who eventually finished fourth.

The young German cemented the win with her second jump however, flying out to 139.5m, comfortably the longest of the competition.

Twenty-one-year-old Riiber, who gained his first World Cup podium back in the 2014-2015 season aged just 17, claimed another win today after winning the ski jumping phase and then finishing the 10 kilometre course in 27min 54.3secs.

Rydzek may feel mixed emotions over his bronze.

In one sense it was a good performance as he only came 17th after the jumping, but in a sprint finish during the cross country he could not quite catch Graabak, crossing the line just 0.8 seconds behind.