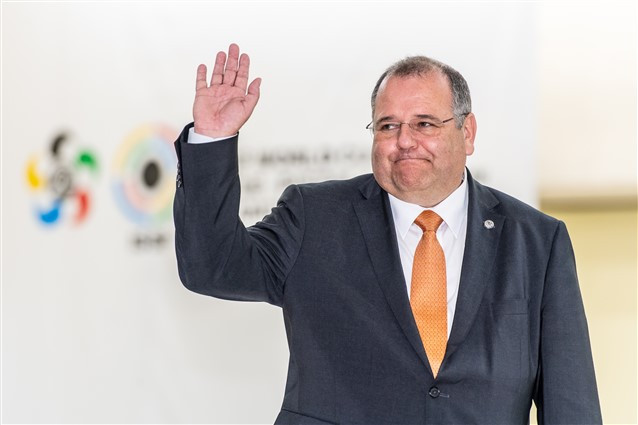 The tensions that simmer below the surface of even carefully-choreographed international sports gatherings like today’s landmark International Shooting Sport Federation (ISSF) General Assembly had become apparent even before this afternoon’s crunch Presidential vote.

Presenting his final report as secretary general, Schreiber displayed an appeal for those present in the conference hall to "Please become united!" on the big screen.

He added: "I have a big wish and request to all of you.

"Please have only sport on your agenda.

The intervention was a clear sign that this generally placid and conservative sports body has been shaken by developments in the run-up to today’s vote to designate a successor to long-serving President Olegario Vázquez Raña.

There had previously been a further reminder of the turbulent countdown to the vote when Schreiber told delegates that Presidential candidate Luciano Rossi had been asked for three bitcoins in exchange for more information about threatening emails that had led to him receiving a police escort at the Munich meeting.

To the ISSF’s knowledge, the author of the emails had not yet been identified, Schreiber added.

Under tough questioning ahead of the vote, Rossi - ultimately defeated by a margin of just four by Russia’s Vladimir Lisin - appeared to suggest that another email had been received while he was at the General Assembly.

There was an almost immediate indication that the outgoing secretary general’s plea for unity had fallen on deaf ears with a call from the floor for a routine vote on whether to approve the auditors’ report and discharge the ISSF Executive Committee to be conducted by secret ballot.

After much initial confusion over whether the threshold for such a vote had been exceeded, it was decided that it had, and the secret vote duly took place - a small piece of history as the first electronic vote ever held at an ISSF General Assembly.

This revealed considerable dissatisfaction among delegates with the motion carried by 174 votes to 104, with 14 abstentions.