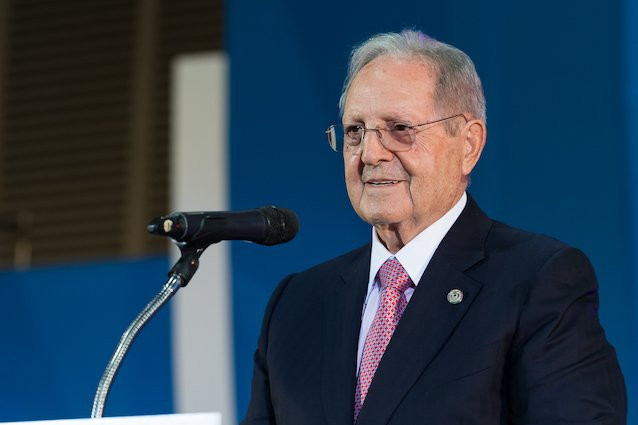 Olegario Vázquez Raña was elected Honorary President of the International Shooting Sport Federation (ISSF) here today, as his 38-year reign as President drew to a close.

The 83 year-old Mexican made clear in a personal address, delivered in Spanish, that he would maintain close ties with the shooting sport community, nurtured over most of his life.

But he said he would not "participate in any issues of the Federation".

Today’s landmark General Assembly also saw a number of awards presented to officials deemed to have made especially significant contributions to the development of shooting sport in recent times.

Those so honoured included: Lee Dalgon, co-chairman of the Organising Committee of the recent World Championships in Changwon, South Korea; Abhinav Bindra of India, former chair of the ISSF Athletes’ Committee; Jorge Alfonso Peña Soberanis of Mexico; and Wilhelm-Xavier Grill and Heinz-Helmut Fischer, both from Germany.

In addition, four ISSF gold medals were presented at the General Assembly.

Vázquez Raña used his address chiefly to reminisce about his long career, recalling at one point how shooting risked for a time getting moved to Las Vegas for the 1984 Summer Olympics, hosted by Los Angeles.

Drawing attention to the large number of Olympic gold medallists in the audience at Munich, he observed that athletes who won Olympic medals became national heroes, "so it is very important to be part of this Movement so our sport is stronger".

Accompanied by his wife, María de los Angeles, he said he was "happy and sad at the same time" that his reign was ending.