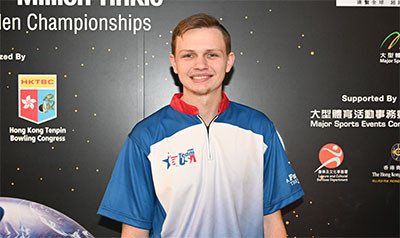 Andrew Anderson of the United Sttates produced a perfect opening flourish as the Men's World Tenpin Bowling Championships got underway in Hong Kong.

That effectively put the 23-year-old American player clear of challenge as he ended the day with a score of 1473.

Edward Rey of Colombia also ended well to take up third position with 1308 while Ricardo Tateishi of Peru produced a late effort of 266 to seize fourth position with 1298.

Kyle Troup was the winner of the second singles squad on day 1 of the World Bowling Men's Championships. @USBC #WBMC2018

Get his take on the lanes, bowling for the USA and his hair options for this week. pic.twitter.com/ZDH89QvEWm

The second squad of singles qualifying  saw success for another American bowler, Kyle Troup, who finished with 1368 to move into overall second place behind his compatriot.

Nico Oksanen of Finland and Mich Hupe of Canada finished second and third behind Troup, with respective scores of 1310 and 1296 to take up third and fourth place overall.

Next up will be the qualifying events for the two remaining squad.

The top four finishers from the combined four squads will advance to the semi-finals and final scheduled to take place on December 1.