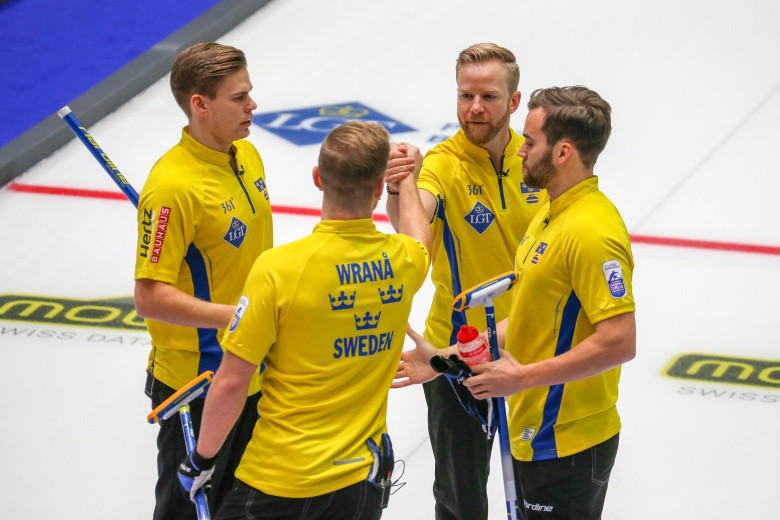 Sweden beat Germany 6-3, while Scotland went all the way to an extra end before defeating Italy 9-6 at the Estonian capital's Tondiraba Ice Hall.

The gold medal match is scheduled to take place on Saturday (November 24).

It will be preceded by the bronze medal match between Germany and Italy tomorrow.

Germany were 2-0 down against Sweden when, in the fourth end, their skip Marc Muskatewitz drew his final stone into the house for one point to open his team’s scoring and reduce their opponent’s lead to 2-1.

In the fifth end, Sweden’s skip Niklas Edin played a hit and roll take-out to score two points and extended his side’s lead to 4-1 at the half-time break.

Eventually, Sweden ran Germany out of stones in the 10th end to claim victory.

"That felt really good," Edin, who will be looking for a record fifth successive win in the final, said.

"We didn’t want to take too many risks, but we felt we were playing well.

In the third end of the other semi-final, Italy’s skip Joël Retornaz drew his last stone into the house to score two points and take a 3-1 lead.

Scotland’s skip Bruce Mouat then hit out an Italian stone to score two points in the fourth end and level the game at 3-3.

In the 10th end, with the score at 6-4 in Scotland’s favour, Retornaz made a double take-out to score two points, level the game at 6-6 and force an extra end.

The Scots had last-stone advantage in that extra end and, after keeping it tidy, Mouat had a nose-hit on an Italian stone to score three points and seal the win.

Earlier in the day, the men’s round-robin stage concluded as Germany gained the fourth semi-final qualification slot in spite of losing 8-2 to Sweden.

There were also victories for The Netherlands, 8-3 over Poland, and Switzerland, 8-7 over Norway.

The top seven teams - Sweden, Scotland, Italy, Germany, Norway, Switzerland and Russia - have all secured direct qualification for the 2019 World Men's Championship in Lethbridge in Canada.

Switzerland, Sweden, Russia and Germany are all through to the women’s semi-finals, which will be played tomorrow.

In the final round-robin session, Switzerland continued their unbeaten run with a 6-5 triumph over Scotland, who had to win to qualify for the play-offs

A steal of one point in an extra end proved to be the difference.

Despite their 7-3 loss to Sweden, Germany’s win-loss record overall bettered that of the Scots and handed them the fourth semi-final place.

Switzerland and Germany will play in one of the two semi-finals, while Sweden and Russia will contest the other having cemented their places with wins today.

While Sweden advanced courtesy of their success over Germany, Russia defeated Denmark 12-5 today.

There were also victories today for Czech Republic, 10-4 against Finland, and Latvia, 11-7 against Italy.

As the top six teams, Switzerland, Sweden, Russia, Germany, Latvia and Scotland have all qualified for the 2019 World Women’s Championship, which are due to be held in Danish town Silkeborg.

Denmark, who finished in seventh place, qualified as the host nation.