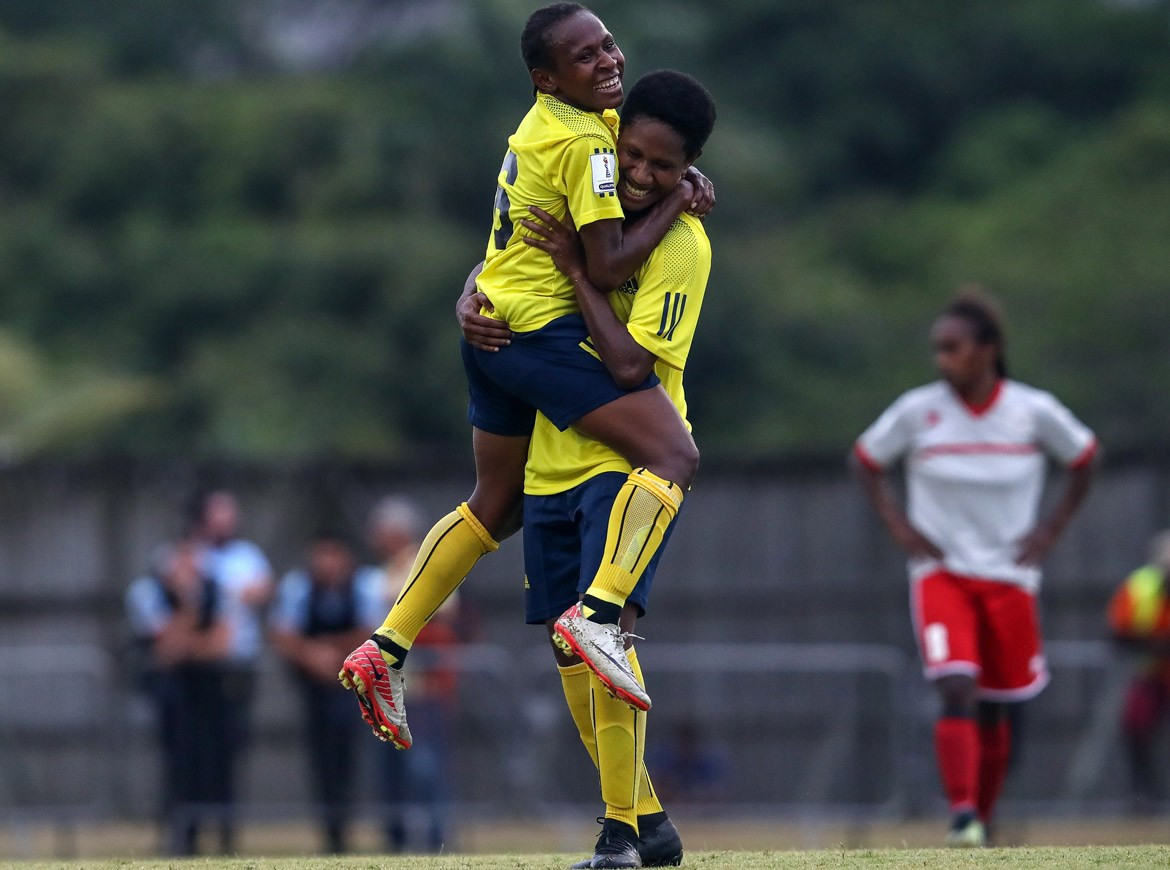 Marie Kaipu scored an impressive five goals at the Stade Yoshida in Koné as her team secured qualification for the semi-finals.

She also provided a fantastic cross into the box from the left for the one other goal, which came after her first two and was scored by Ramona Padio in the 36th minute.

Substitute Sydney Gatha added a consolation goal in the third minute of stoppage time but the damage had already been done.

"I love my defence, they did some really great defending today against a really good team," Peter Gunemba, Papua New Guinea's coach, said.

"Then also we had our super girl [Kaipu] with us today."

On a goal-filled day, Tahiti had earlier drawn 5-5 with Samoa at the same venue.

An incredible opening 10 minutes saw Samoa twice surrender a lead before falling behind for the first time in the match.

Samoa forward Sina Sataraka scored what has to be one of the quickest goals in OFC Nations Cup history when the 15-year-old opened her account within the first 15 seconds.

FULL TIME | What a match! All square here at Stade Yoshida with both sides leaving it all out on the pitch #OFCWNC #TAHSAM 5-5 pic.twitter.com/UAuAQUzOM3

Carole Teotahi cancelled it out but it was not long before Samoa were back in front courtesy of a Hana Kimitete own goal.

Teotahi then pulled Tahiti level for the second time and her team soon went onto take the lead for the first time as Hanihei Taumaa slotted past an advancing Ronisa Lipi.

A foul on the edge of the area in the 21st minute was Samoa’s chance to restore parity once more, with Hana Malo stepping up and delivering a rocket past the wall.

But they fell behind again in the fourth minute of first-half half stoppage time as Ninauea Hioe got his name on the scoresheet.

The scoring did not slow down in the second-half as Samoa failed to contain the threat in their own area, allowing Teotahi to make it 5-3.

Sataraka struck twice, though, in the 79th and 89th minutes, to ensure her side would share the spoils.

The draw earned both Tahiti and Samoa their first point and they find themselves two behind New Caledonia.

The final round of games in Group A is scheduled for Saturday (November 24).

Attention is set to turn back to Group B tomorrow with Tonga facing Fiji and New Zealand going up against the Cook Islands in Nouméa.

Action also continued today at the Women's Africa Cup of Nations in Ghana with holders Nigeria getting their campaign back on track with a 4-0 win over Zambia at the Cape Coast Sports Stadium.

Desire Oparanozie's goal in the 41st minute set Nigeria, who lost their opening Group B game 1-0 to South Africa on Sunday (November 18), en route to victory.

"First of all, I am very happy we managed to score four goals in this game but honestly I am not 100 per cent happy with our performance because we should have scored more goals," Nigeria's head coach Thomas Dennerby said

"After our opening game in which we lost, I talked about being professional and using experience to come back in the next game, not being anxious and working hard."

Thembi Kgatlana bagged a quickfire second-half brace, while there were also goals for Linda Motlhalo, from the penalty spot, as well as Mpumi Nyandeni, Refiloe Jane, Amanda Mthandi and Jermaine Seoposenwe.

The final round of games in Group B is scheduled for Saturday (November 24).

Following a rest day tomorrow, Group A will take centre stage on Friday (November 23) with Cameroon facing Ghana in Accra and Algeria going up against Mali in Cape Coast.