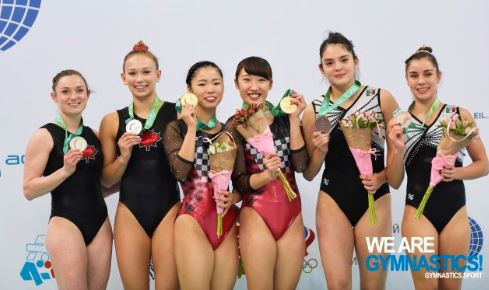 And Japanese pair Hikaru Mori and Megu Uyama earned a first win in the women’s synchro event at the Sports and Concert complex.

In earning his fourth title since 2013, Zalomin won the first medal for the Russian hosts.

"I came here with the specific goal of getting the gold medal to defend my world title," Zalomin said.

"And I achieved my goal."

Team-mate Vasilii Makarskii lost the silver medal after being penalised for repeating the same pass he had shown in qualification.

This bumped 17-year-old Ruben Padilla of the United States from bronze to silver in his first World Championships.

"When I did that, I was very happy.

"Adding a medal is just amazing to me.

"It's always been my dream to stand on that podium but I never thought it would be in my first year."

Lucas Adorno of Argentina won the bronze, his first medal in his sixth world appearance.

Jia scored 71.100 for two passes that were the most difficult attempted by any of the finalists.

Having recently taken up artistic gymnastics in an attempt to qualify for the 2020 Olympic Games as a specialist, Jia said she was happy to win the tumbling title after overcoming a recent injury to her leg caused by practising the floor exercise.

"It was a huge surprise for me because I don't look at the scoreboard and when they told me I was in second I couldn't believe it."

Mori and Uyama's victory in the women's synchro was the first world trampoline title for the Japanese women.

The pair had trained together for only a month after an injury to Mori's usual partner, Yumi Takagi.

"We were under so much pressure because we were in first place in qualification, but we came out and showed the best routine we could do," Mori said.

Dafne Navarro and Melissa Flores of Mexico won bronze, the first for Mexico in trampoline.

Hancharou, the 2016 Olympic champion, and Rabtsau defended their men's synchro title from 2017.

Second in qualification, the Belarus pair scored 52.510 for first place.

Allan Morante and Sébastien Martiny of France, the bronze medallists in 2015, took silver.

Ty Swadling and Dominic Clarke of Australia picked up bronze in their first competition as a pair.

Top qualifiers Tu Xiao and Dong Dong of China ended up fifth after struggling to stay in sync.

Competition concludes tomorrow with the semi-finals and finals for men's and women's individual trampoline, and the finals for women's double mini and men's tumbling.