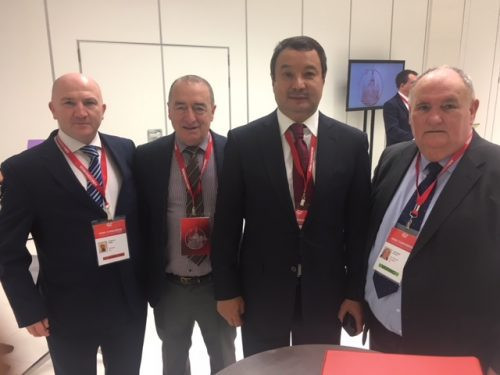 The controversial Uzbek won 86 out of 134 votes at the AIBA Congress last Saturday (November 3) to comfortably beat his only rival, Serik Konakbayev from Kazakhstan.

Rakhimov's election has led to fears that AIBA could be suspended by the International Olympic Committee (IOC) and a new organisation set-up to run the boxing tournament at Tokyo 2020.

He was listed in 2012 by the United States Department of the Treasury among the main members of a criminal organisation consisting of immigrants from the former Soviet Union's Brothers Circle.

They alleged that Rakhimov helped the thieves-in-law group to "resolve issues" with law enforcement agencies, organised meetings and solved other problems.

In December 2017, the Office of Foreign Assets Control of the United States Department of the Treasury included Rakhimov on its sanctions list as part of the fight against the Eurasian transnational criminal group.

He denies all allegations against him.

"It is unusual for the IABA, as is the case with most National Federations, to reveal how they voted in an election, but given the intense commentary surrounding this particular election it was felt by the [IABA] Board of Directors and Central Council, that it was in the best interests of Irish boxing to do so in this instance," read a statement from Ireland's national governing body.

"It is Central Council that decide how the IABA vote is to be cast in all AIBA elections and as always, the vote is utilised so as to best further and protect the interests of boxing as a sport."

The IABA was represented in Moscow by a three-man delegation including Fergal Carruth, the IABA chief executive and brother of 1992 Olympic boxing gold medallist Michael, President Dominic O'Rourke and secretary Art O'Brien.

Boxing is Ireland's most successful Olympic sport with 16 medals won in total, one more than all other sports combined.

"Our decision was made following careful consideration of what was in the best interests of the sport and without any further information on the President other than that what we have learned through the media," the IABA statement said.

"The IABA remain concerned about the future Olympic status of boxing given the outcome of the election particularly, given that boxing remains Ireland's most successful Olympic sport ever.

"We acknowledge that there remains significant confusion in the aftermath of the AIBA election but are hopeful that the IOC and AIBA can reach resolution on the issues between them.

"The IABA is committed to assisting in any way possible to achieve that end.

"We are comforted by a number of factors not least the IOC's commitment to the athletes, the boxers, that they will not be penalised as well as the AIBA President's comments that if a choice has to be made between boxing in the Olympics and one man that there is no choice.

"The IABA will not be commenting any further on this matter."