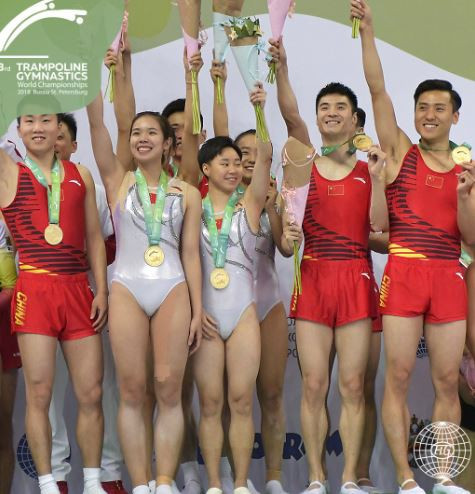 Although the Chinese lived up to their billing having finished top of qualifying with 681.195 points, the Russian team, second best qualifiers with 664.690, failed to get a medal, finishing fifth and last.

Portugal took silver with 24 points and Canada bronze with the same total in the concluding event of the second day of action at the Sports and Concert Complex.

The United States finished one place off the podium.

China's Tu Xiao and Dong Dong topped qualifying in the men's synchro event with 94.930 points ahead of the Belarus pairing of Uladzislau Hancharou and Aleh Rabtsau, who totalled 94.850.

The Australia 2 combination of Ty Swadling and Dominic Clarke occupied third place with 94.280.

The women's synchro qualifying was topped by Japan's Hikaru Mori and Megu Uyama with 88.670, followed by Canada's Rosannagh Maclennan and Sarah Milette with 87.490 and the Australia 2 pairing of Cassandra Hoare and Claire Arthur, who totalled 87.460.

In the women's double mini trampoline the standings were led by Spain's Melania Rodriguez, wth 70.300.

Second place in qualifying went to Tristan van Natta of the US with 69.800, ahead of Laurence Roux with 69.200.