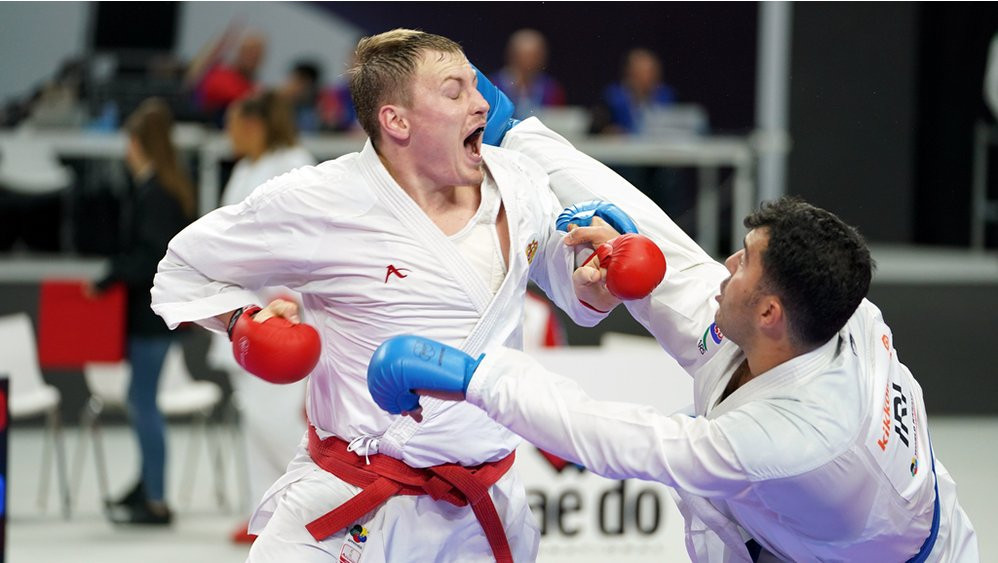 Defending men's under-84 kilograms champion Ryutaro Araga crashed out of the Karate World Championships and will not be taking home a medal after he was stunned by Belarusian Anton Isakau in the third round here today.

Isakau recorded two ippon scores to earn a thumping 6-0 win over Araga, the current world ranking leader and favourite to retain the title he won in 2016.

The unfancied Belarusian claimed fifth place at the Karate-1 Premier League in Tokyo last month but was not expected to cause Araga too many problems.

Isakau, however, put in a polished display, keeping the Japanese athlete at arm's length before he struck with the opening ippon.

Araga was then chasing the match and Isakau took full advantage, registering another score of three late on to put the gloss on one of the best results of his career.

Isakau was not able to go any further in the competition, however, as he suffered a 4-3 loss at the hands of Croatia's Ivan Kvesić in the next round.

Kvesić continued his run by coming from behind to knockout reigning European champion Uğur Aktaş with a 2-1 win in the semi-finals.

Victory for the Croatian set up a meeting with Ukraine's Valerii Chobotar, who beat Kazakhstan's Daniyar Yuldashev by decision after the other last four encounter ended 0-0 at the end of regulation time.

The under-84kg category was among the only divisions held on the first day of action here that did not go to the form book.

In the kata competitions, both the men's and women's finals will be contested by the top two seeds in each category.

Japan's Kiyou Shimizu maintained her pursuit of a third world title by comfortably progressing to the gold medal bout, where she is scheduled to face Spain's Sandra Sanchez.

"I have had so much pressure lately, and until you see the flags, you never know what can happen," said Sanchez.

"The important thing is that I got to win all my bouts, and doing it by 5-0 also gives me a lot of confidence."

The men's final is also due to pit Japan against Spain as two-time defending champion Ryo Kiyuna faces Damian Quintero.

In similar vein to the women's competition, the two karatekas were streets ahead of their rivals and reached the gold medal showdown on Saturday (November 10) without losing a point.

The contests for gold in the kata divisions is due to be be a repeat of the 2016 finals.

In the over-68kg women's kumite event, Japan's Ayumi Uekusa is on course for a successful defence of her title after she edged France's Anne Laure Florentin 2-0 in a hard-fought semi-final.

Uekusa, this year's Asian Games gold medallist, will face Greece's Eleni Chatziliadou in a repeat of the 2016 final.

Chatziliadou was also made to work hard for her spot in the showpiece contest, ousting Yazed Abouel of Egypt 3-2.

Iran's Sajad Ganjzadeh, seeking to retain his men's over-84kg, demonstrated his scoring ability during the early rounds before he dispatched Russian Alexander Pshenitsyn 8-1 in a one-sided semi-final clash.

Germany's Jonathan Horne awaits for the Iranian in the final after he ended the hopes of Spain's Sakho Babacar Seck.

Zaretska beat Ukraine’s Halyna Melnyk 3-2 in her semi-final as Isaeva punched her ticket with victory over Belarus’ Maryia Aliakseyeva.

The event here is due to continue tomorrow.