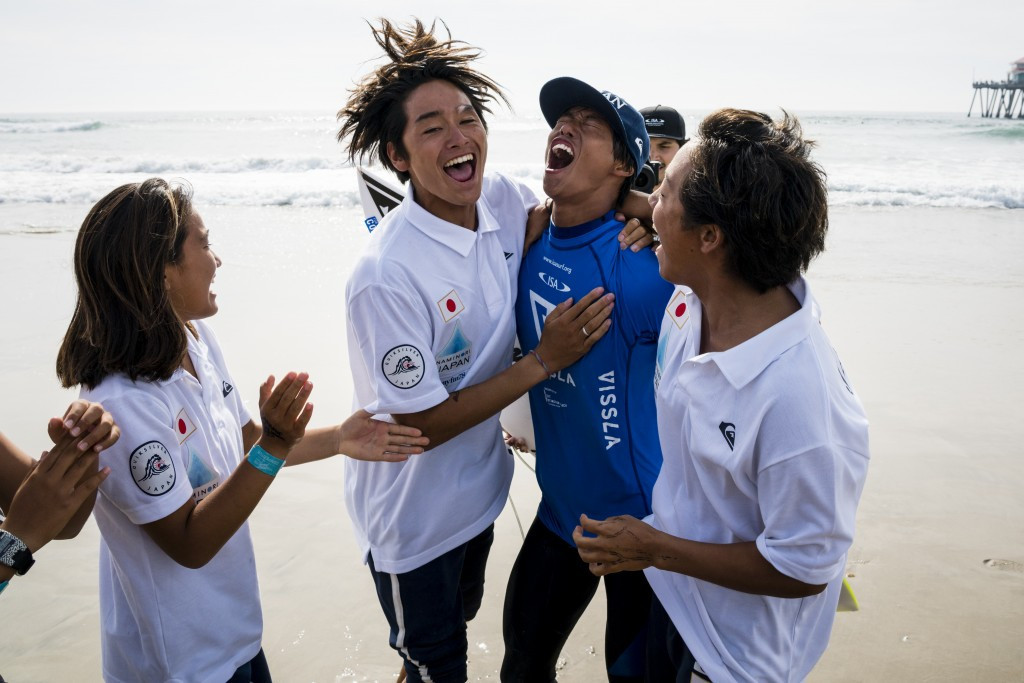 Japan made history by winning a first team gold at the International Surfing Association (ISA) World Junior Championships at Huntington Beach in California.

Gold was confirmed by Keanu Kamiyama's emotional individual gold medal victory in the boys' under-18 section.

"I am amazingly happy," said Kamiyama.

"For anyone in Japan who surfs, they now know that Japanese surfers are capable of a gold medal."

That result, added to four other individual medals from other team members, was enough for Japan to regain the lead it had held over the hosts two days earlier and claim overall victory by a margin of 132 points.

The US dropped to the silver position, with Australia earning bronze and Hawaii, fourth, earning the copper medal.

This first-ever junior team gold performance comes shortly after a historic first team gold for Japan in the World Surfing Games that took place in September in their home waters of Tahara.

The exceptional performances by Japan across both open and junior divisions bear testimony to the extraordinary growth of surfing in the country since the sport's inclusion in the Tokyo 2020 Olympic Games.

Germany's Rachel Presti made history by winning the girls' under-18 division as she earned the first-ever ISA medal for Germany across any discipline.

"I am really happy to take it home for Germany," said Presti.

"This first gold for Germany means a lot.

"I want to encourage other people in Germany to surf and bring it to a global stage."

The girls' under-16 grand final began with the host nation's 13-year-old Caitlin Simmers posting the highest wave score of the day with 9.17.

The Japanese duo of Shino Matsuda and Sara Wakita were unable to match that, and took silver and bronze, with Spain's Lucía Machado finishing fourth.

"This is my biggest win," said Simmers.

"Since surfing is in the Olympics, that is a new goal for me to strive for."

Australia's Grayson Hinrichs put on a winning show in the boys' under-16 final.

He jumped out to an early lead with a solid 7.5 and then waited until the final minutes of the heat to earn his highest score of 8.6 to take the gold ahead of respective silver and bronze medallists Kade Matson and Levi Slawson of the US, with copper going to Japan's Riaru Ito.

"This is the best feeling of my life," said Hinrichs.

"I've never dreamed of this happening.

"It's the biggest boost of confidence to think that all the top surfers have won this event, and now I have done it too.

ISA President Fernando Aguerre said: "The words that I have right now are 'thank you'.

"Thank you to our title sponsor VISSLA for believing in the power of junior surfing and thank you to Visit Huntington Beach for opening their arms for these over 1,000 visitors from around the world.

"We had an amazing nine days of sun, no wind, and great waves.

"We have 44 countries represented, almost a quarter of the world, and we had the first edition to feature a gender equality format for boys and girls.

"Keep an eye out for these young athletes in the lead up to the Tokyo 2020 Games, because we could very well see them surfing on the world's greatest stage in sport."