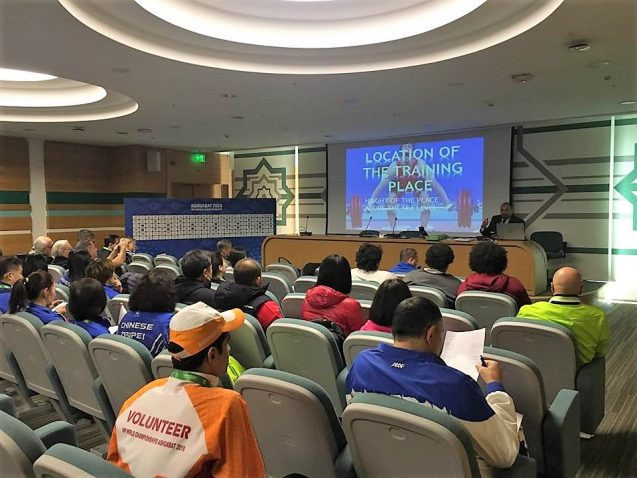 The International Weightlifting Federation (IWF) has held its latest Education Seminar with the much-criticised Anti-Doping Administration and Management System (ADAMS) among the topics discussed.

A total of 79 athletes from 27 countries who failed to log their own whereabouts on the global anti-doping database have been barred from the 2018 IWF World Championships here in Turkmenistan's capital.

The IWF has issued frequent warnings to athletes and their national federations about updating their whereabouts information on ADAMS, which is operated by the World Anti-Doping Agency (WADA).

There have been changes in ADAMS which, according to many who are on it, is not user-friendly - especially in parts of the world where communications are difficult.

It was among the topics discussed at the IWF Education Seminar with participants hearing a detailed explanation of the importance of logging whereabouts, the submission process, whereabouts failures and what to do in the event of technical problems.

Using the e-learning platform, athletes can watch three videos about their whereabouts obligations, the doping control process and rules surrounding Therapeutic Use Exemptions.

After completing a short test, those who pass receive an IWF certificate valid for one year after the day of completion.

All those participating at the 2018 IWF World Championships shall complete the iLiftClean course, it is claimed.

At the end of the Education Seminar, athletes had the opportunity to do so with the help of IWF staff.

Those who missed the opportunity can attend the second IWF Education Seminar today or visit the IWF Anti-Doping Outreach stand between now and the end of the World Championships on Saturday (November 10).

The Presidents of the Iranian and Filipino national federations were among those to call for changes to ADAMS at last week’s IWF Congress.

Iran Weightlifting Federation President Ali Moradi was the first to express his criticism, arguing that athletes who have a good history of being tested by WADA or their National Anti-Doping Organisation should be granted extensions beyond the set deadlines.

Also voicing his concerns over ADAMS was Philippine Weightlifting Association President Monico Puentevella, who stated that two of the country’s weightlifters had been prevented from competing at the 2018 IWF World Championships due to failing to log their own whereabouts.

According to Puentevella, one of the athletes missed the deadline by what he considered to be a short period of six days.