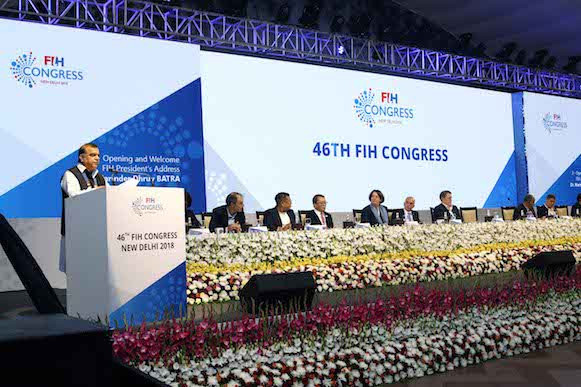 Former Pakistan international Shahbaz Ahmad and Ghana’s Elizabeth Safoa King both unseated incumbents on the Executive Board as Trinidad and Tobago’s Maureen Craig-Rousseau and Michael Green of Germany retained their seats at the International Hockey Federation (FIH) Congress in New Delhi.

Craig-Rousseau and Green were each re-elected to serve fresh four-year terms as Canada's Mary Cincinelli, Australia's Clare Prideaux and Lydia Sanyu of Uganda all failed with their bids for a place on the ruling body.

Australian Mark Knowles, who retired after leading his team to the Commonwealth Games title in Gold Coast in April, Janne Müller-Wieland of Germany and Argentinian Carla Rebecchi secured a spot on the Committee as regular members.

Ireland's David Harte and Camila Caram of Chile were elected as liaison members, who are required to be current players.

Those chosen today join Scott Tupper of Canada, India's Sreejesh Parattu Raveendran, Kate Richardson-Walsh of England and Kenya's Jacqueline Mwangi, who were all recommended nominations by the Executive Board.

They were appointed to "give both gender and geographic balance".

Other notable decisions taken by the Congress included the establishment of a new development strategy, entitled "Hockey2024".

A spokesperson for the FIH confirmed to insidethegames that this would go alongside the current "Hockey Revolution" initiative, launched in October 2014, and was not a replacement for it.

Two projects have already been announced as part of the Hockey2024 plan, with one focusing on getting more players into the game and the other aiming to distribute 110,000 hockey sticks by the Tokyo 2020 Olympic Games.

"The development of the game is the number one mission of every International Federation," said FIH chief executive Thierry Weil, appointed in March.

"The revenues we generate as a federation have only one goal: to develop hockey worldwide.

"I’m delighted that Congress has fully supported the strategy which the FIH has presented today in this crucially important area."

"With the Hockey Revolution you have successfully set the course to adapt hockey to the fast-paced changes in our world", said Bach.

"I can only encourage you to continue on your chosen path of change and innovation, because by promoting hockey you are also promoting our common Olympic values across the entire globe.

"This Congress is therefore an important moment to look ahead and to ensure that the FIH is well equipped to drive the Hockey Revolution forward.

"As you set the course for the future of hockey, you can always count on the IOC as a partner by your side."

The Congress was the first presided over by India's Narinder Batra, elected as head of the worldwide governing body in November 2016.