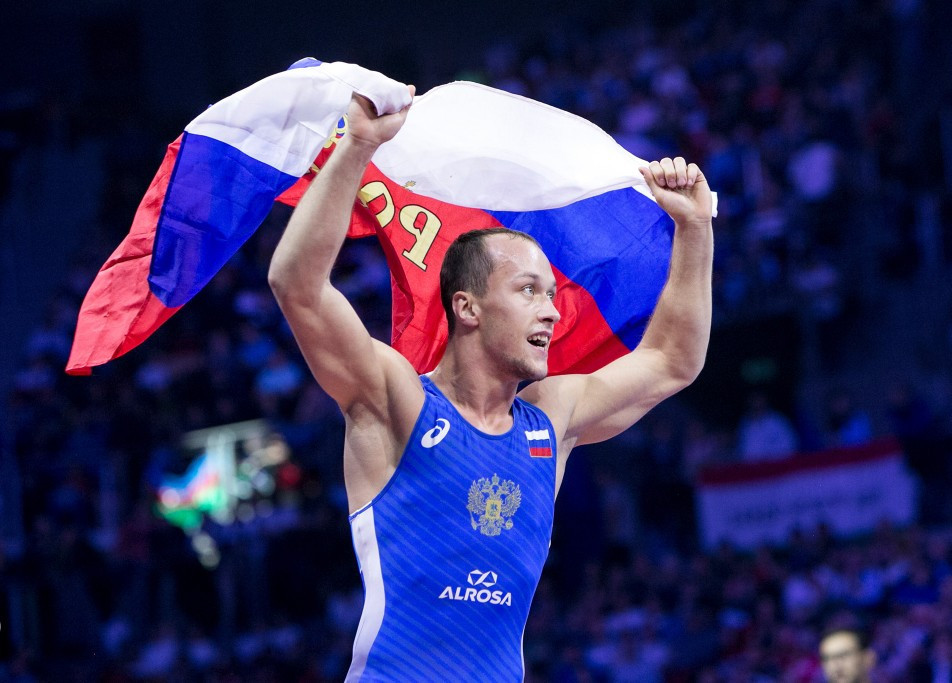 With International Olympic Committee President Thomas Bach in attendance once again, Russia won two golds tonight at the United World Wrestling World Championships in Budapest to move top of the medals table with just one day to go.

In the first gold medal match of the night here at the Papp László SportArena, Russia's Sergei Emelin beat Moldova's Victor Coibanu by technical superiority to win gold in the 60 kilograms Greco-Roman division.

Then in the second final of the evening Artem Surkov comfortably beat the 2016 Olympic champion at 66kg, Davor Stefanek from Serbia, 7-0 in the new 67kg category.

It means with just three world titles still to be decided, Russia top the medals table with seven golds in all ahead of Japan who have five.

At 60kg the bronze medals were taken by Kazakhstan's Aidos Sultangali and China's Sailike Waihan, while at 67kg they were won by Poland's Gevorg Sahakyan and another Kazakh, Meiirzhan Shermakhanbet.

In the only other gold medal match of the night at 87kg, the top prize was claimed by Turkey's Metehan Basar, who in winning got his hands on his second world gold in two years, having won 85kg gold in Paris.

The bronzes at 87kg were won by Georgia's Roberti Kobliashvili and Armenia's Artur Shaninyan, who won his medal after a strange end to the match.

With 10 seconds to go his opponent Islam Abbasov seemed to decide the match was lost, and so collapsed to the floor, screaming and punching the floor in anger.

With Abbasov lying face down on the floor the match was clearly over, but having stopped trying significantly before the end of the match, the officials eventually stopped the clock and told him to get up.

However, by the time they did so, there was only one second left, meaning as soon as Abbasov rose to his feet again, the match really was over.

Tomorrow the 2018 World Championships will come to an end, with medals decided in the final three Greco-Roman categories yet to finish, at 77kg, 97kg and 130kg.