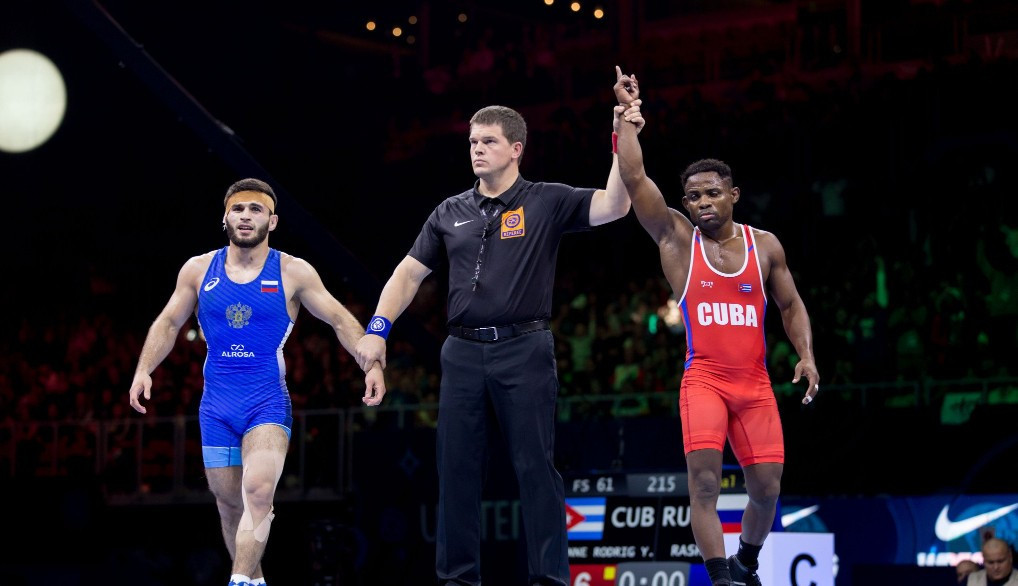 The first gold medal of the 2018 United World Wrestling World Championships was won by Cuba's Yowlys Bonne Rodriguez here this evening amid chaotic scenes as his opponent's coach was shown a red card before pushing the referee in anger.

The 2017 world bronze medallist was up against Russia's second seed Gadzhimurad Rashidov in the 61 kilograms freestyle final, with the Cuban taking a 5-2 lead into half time thanks to an incredible throw right on the bell here in the Hungarian capital.

Three push-outs for Rashidov brought the score back to 5-5 but, when the match ended, the Cuban took the win thanks to his high scoring throw in the first round.

When the bell sounded, Rashidov punched the floor in frustration, while his coach began shouting at the referee.

Whatever was said, it clearly did not go down well, with the Russian coach shown a yellow and then a red card in quick succession.

He refused to leave it there, though, giving the referee a shove, before being marched out of the Arena to the sound of jeers and whistles from the crowd.

It all ensured the Championships got off to a lively start.

The two bronze medals in that category went to Joseph Colon from the United States and Tuvsintulga Tumenbileg from Mongolia.

Earlier on in the afternoon, on what was officially day two of the event, UWW President Nenad Lalovic declared the Championships open during a short Ceremony featuring dancers, fire breathers and even a man in a cowboy hat with a whip.

Speeches were also given by Budapest's Mayor Istavan Tarlos and the President of the Hungarian Wrestling Federation Szilárd Németh, in which he praised the quality of wrestling in the country.

"The quality of Hungarian wrestling is illustrated by the fact that we have been able to host high quality events," he said.

"When it came to holding World Championships, whether as the originally selected host country or as a quick replacement."

Back on the mats, the second gold of the Championships was won by Russia's Zaurbek Sidakov in the 74kg freestyle class.

The 22-year-old beat Georgia's Avtandil Kentchadze to claim his first world title, having knocked out five-time champion Jordan Burroughs from the US, who later earned bronze, and two-time world champion Frank Chamizo Marquez from Italy.

In the 86kg freestyle event the gold medal was taken by David Taylor III from the US, who beat Turkey's Fatih Erdin by fall, 12-2.

Erdin was the top seed in the competition, but he simply was not good enough on the night and had to settle for the silver medal.

The two bronze medals were won by Spain's Taimuraz Friev Naskidaeva, who in the process picked up his country's first world freestyle medal, and Iran's Hassan Aliazam Yazdanicharati.

The final gold medal of the night was won by Georgia's Geno Petriashvili in the 125kg freestyle event.

In claiming the gold, the Georgian defended his world title from Paris in 2017.

Tomorrow medals are due to be awarded in four more categories, the 57kg, 65kg, 79kg and 92kg freestyle classes, while preliminary action is set to begin in two women's classes and the final two freestyle events.