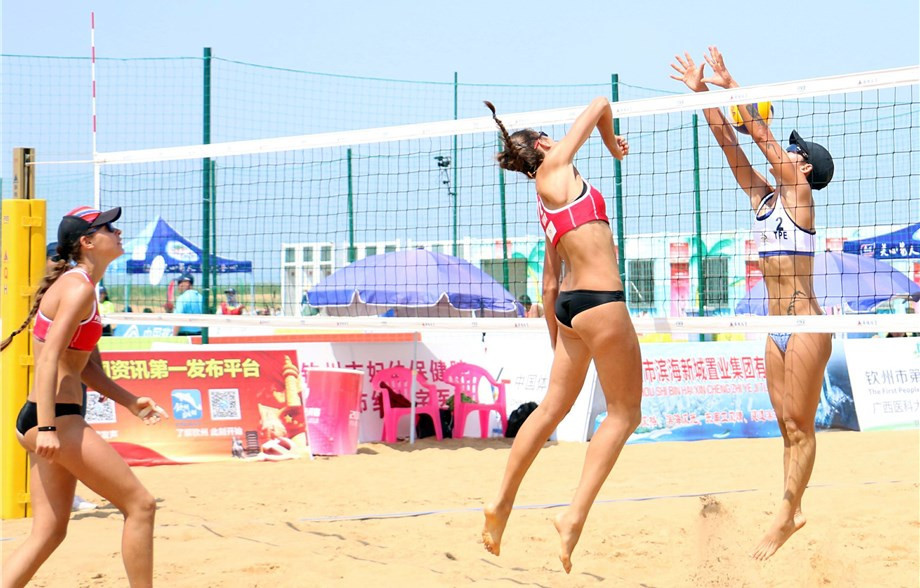 Ukraine’s Diana Lunina and Maryna Samoday won the match of the day today at the Federation of International Volleyball (FIVB) Beach World Tour three-star event in Qinzhou, beating the United States pair Amanda Dowdy and Irene Pollock in a tie-break.

The match ended 22-20, 20-22, 21-19 in Lunima and Samoday’s favour meaning they move into the next round, but afterwards Samoday admitted she did not initially think they could win, despite taking the first set.

"We didn’t believe at first that we could win," she said.

"We stayed together and had great team work.

"We fought for every point even when we were losing.

"We didn’t even look at the score, we just fought hard."

Dowdy and Pollock lost both of their matches today, also falling to a 21-15, 21-13 defeat against their compatriots Sarah Sponcil and Kelly Claes.

Just like yesterday most of the pairs from the US had a good day however, with Dowdy and Pollock the only duo to lose.

In other matches, Slovakia’s Andrea Strbova and Natalia Dubovcova and Switzerland’s Laura Caluori and Dunja Gerson cruised to the second round with straight-set wins, while two Spanish pairs Amaranta Fernandez and Angela Lobato and Paula Soria and Ana Belen Carro completed the line up for the next round with wins of their own.

Having already picked up two World Tour silver medals this year in Lucerne and Tokyo, they afterwards said they hope their success can inspire more Serbians to take up the sport.

"We are trying to give an opportunity for the new Serbian teams to be on the World Tour and we are pushing them to play in more international tournaments," Basta said.

"Maybe we are the first Serbian team at this moment, but hopefully there will be more teams in the next few years."

Elsewhere in the draw, Thailand’s pair of Radarong and Hongpak took the honour of winning the closest match of the day.

They came from behind to win against Vanuatu’s Pata Miller and Toko Sherysyn, despite losing the first set by an epic score line of 28-30.

Rather than let that demoralise them however, they came back to level the match 21-17 in the second and then took the third 15-12.