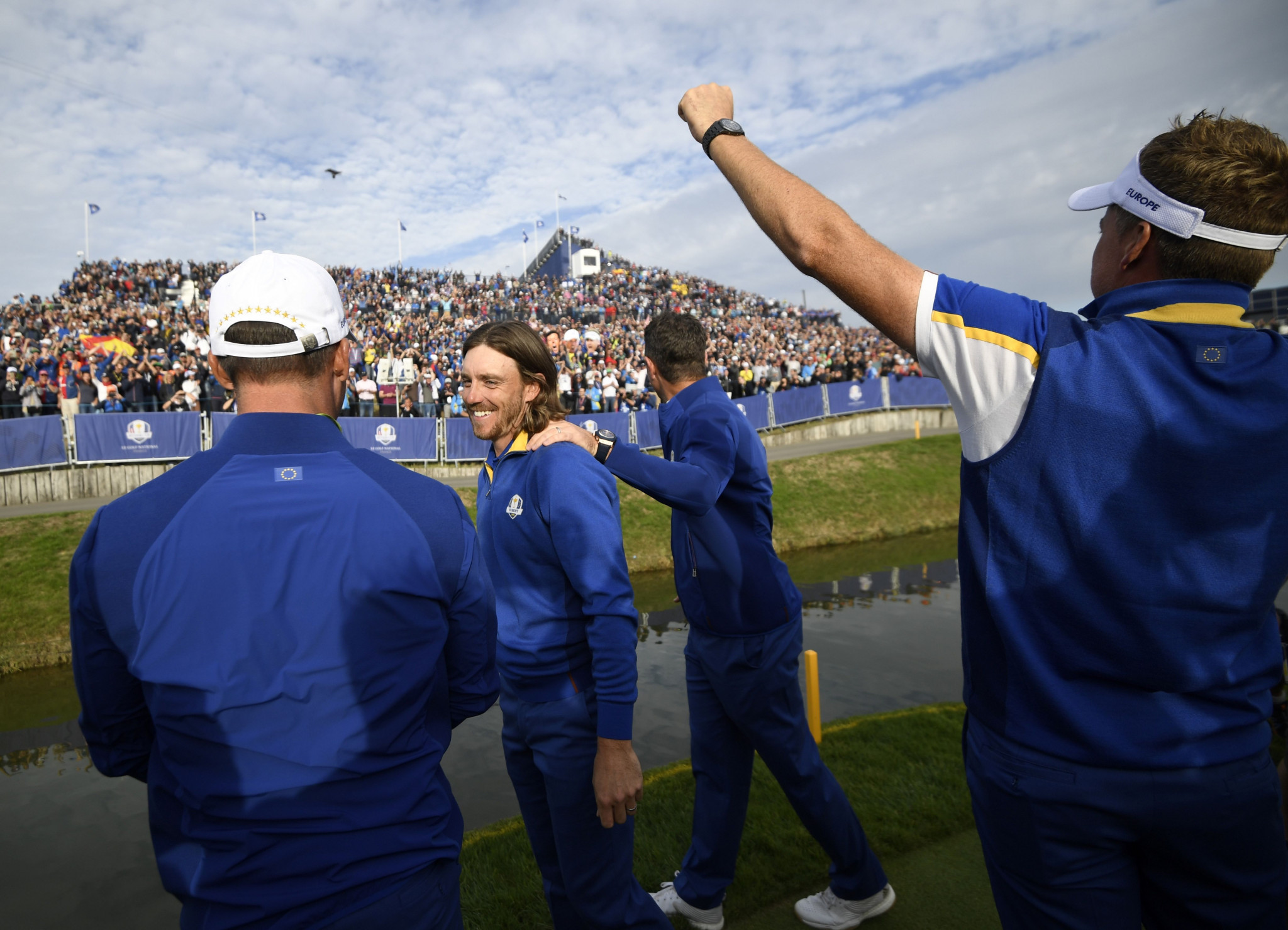 Europe regained the Ryder Cup as they beat the United States 17½-10½ at Le Golf National in Paris, with Open champion Francesco Molinari getting his team to the required winning total of 14½ points by winning his singles match against Phil Mickelson.

In so doing, the Italian also became the first European to win five points in this event, having won two foursomes and two fourball matches with partner Tommy Fleetwood in the preceding two days.

Molinari's 4&2 win was followed a little later in the afternoon with a 2&1 victory by Sergio Garcia over Rickie Fowler which meant the Spaniard surpassed Sir Nick Faldo as the Ryder Cup's leading European points scorer with 25½.

Europe had carried a 10-6 lead into the final day of 12 singles matches, but after the opening four matches had seen the US win three and half one, their lead had been cut to 10½-9½.

That, however, was the US high water mark as Europe won seven of the remaining eight matches.

Justin Thomas got the holders off to the right start in his opening match as he beat Rory McIlroy 1 up.

And after Brooks Koepka and Paul Casey had drawn the second singles match, the US began to sense a change in fortune as Webb Simpson beat Olympic champion Justin Rose 3&2 and then Tony Finau turned Fleetwood's 4-0 record into 4-1 as he won emphatically, 6&4.

But victories for two of Europe's less heralded players against two of the US big hitters tipped things decisively the way of the home team.

When Ian Poulter beat Dustin Johnson 2 up to take Europe's lead to 13½-9½, the challengers needed one more win to get over the line - and Molinari obliged.

The Italian, who was immediately drenched in beer by celebrating fans, said it "means more than winning majors".

Henrik Stenson's 5&4 win over Bubba Watson made it 15½-9½ before Garcia secured his personally historic victory.

"I don't usually cry but today I can't help it," said Garcia.

"It's been a rough year.

"So thankful for Thomas [Bjorn] to pick me and believe in me.

"I am so happy, so happy to get the cup back.

"It was one of those years when nothing seemed to happen.

"But I've never had so many big cheers as I've had this week.

"They had a hell of a team, but it shows how good we are too."

Patrick Reed's 3&2 victory over Tyrrell Hatton did no more than add another vestige of respectability to the US score, before Alex Noren, who beat Bryson DeChambeau 1 up, rounded things up for the jubilant home team.

Fleetwood and McIlroy led a "thunder clap" with an exuberant crowd, while captain Thomas Bjorn embraced each of his "amazing" players.

"Well, this is certainly not boring.

"I've experienced a lot of Ryder Cups but this is the top one."