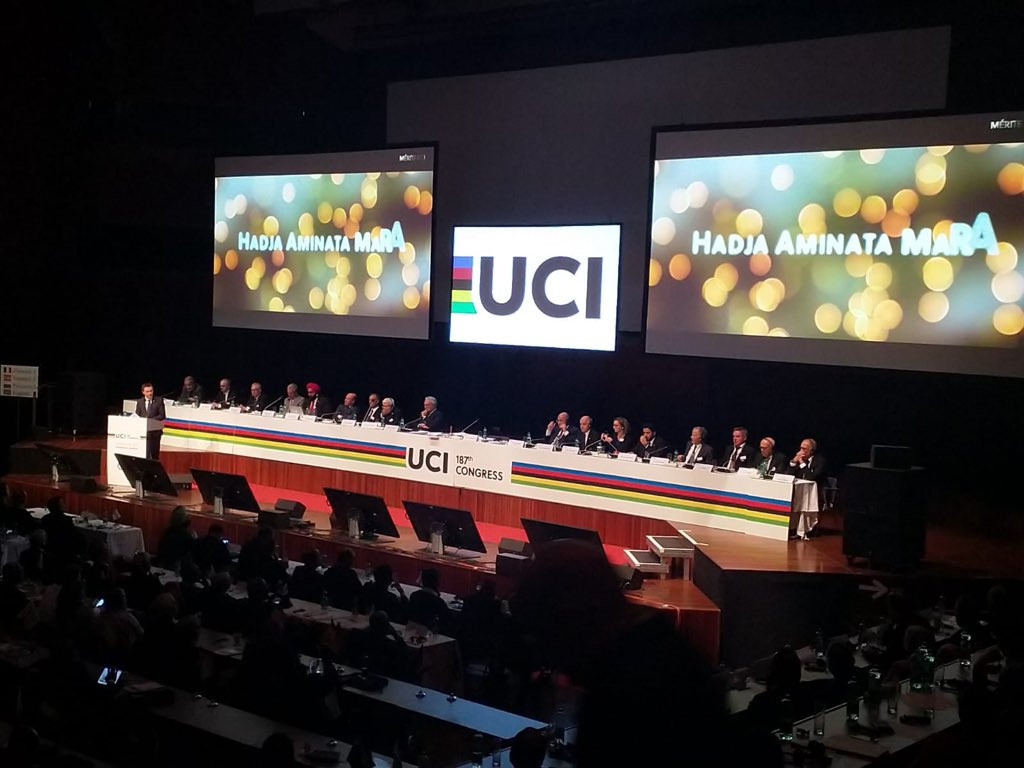 International Cycling Union (UCI) President David Lappartient has claimed national federations have shown their support to his Agenda 2022 programme at the governing body’s Congress in Innsbruck.

The Congress took place in the Austrian city alongside the UCI Road World Championships, which have been taking place this week.

A year on from his landslide election victory in Norway, Lappartient asserted that the 130 member associations present have backed objectives going forwards.

It takes the overall UCI membership to 194, with a further six targeted by 2022.

The Congress saw Lappartient present his Agenda 2022 project, which was approved by the UCI Management Committee in June.

"I am delighted that an unprecedented number of National Federations has come to the annual UCI Congress this year in Innsbruck, and to have observed their desire to support the objectives of our Agenda 2022," the Frenchman said.

"We have never been so many or, I am convinced, so united behind a project for the global growth of our sport.

"At the end of my first year at the head of the UCI, this is a tremendous encouragement to continue our commitment in this direction."

The establishment of a World Championships for several disciplines, which would take place in one region the year before an Olympic Games, was among the key initiatives in Agenda 2022.

Efforts to boost gender equality and solidarity programmes were also central to the idea.

The UCI stated that central elements of the programme were presented, with their solidarity efforts being led by a new Solidarity and Emerging Cycling Countries Commission.

A Congress by the Commission was held yesterday with collaboration from Olympic Solidarity.

A record-breaking of 130 National Cycling Federations from all over the world attended the @UCI_cycling Annual Congress today. I want to thank them for their continuous support. pic.twitter.com/dhaOvklBL0

"In line with the commitments made by its President, the UCI will strengthen its support to National Federations and Continental Confederations," the UCI stated.

"In the same domain, the UCI World Cycling Centre (WCC) director shared with the participating National Federations, the UCI WCC's vision for the years to come.

"This vision is built on three principal axes: training of high-level athletes from the five continents, the development of a new World Cycling University dedicated to the provision of training in diverse professions within cycling, and solidarity actions."

The efforts look set to be boosted by funds from the governing body, with their 2019 budget standing at CHF47 million (£37 million/$48 million/€41 million).

The Congress also accepted a modification to the UCI Statutes, which is claimed to establish greater transparency in finances and also at Continental Confederation elections.

A Cycling Anti-Doping Foundation report was approved, while Professor Xavier Bigard was present at the Congress for the first time.

The Frenchman was appointed as the UCI medical director in April, officially taking up his role in June.

The UCI have stated Bigard is involved in the drafting of legislative provisions aiming to ban any rider having used tramadol or corticosteroids from starting a race.

Earlier this year, the UCI expressed hope they would have measures in place to ban tramadol from the start of the 2019 season, along with introducing measures around corticosteroids.

Developments are said to be ongoing to further expand the range of equipment at the UCI's disposal.

🏅 2018 UCI Merits 🌈
Mr Eddy Merckx 🇧🇪
✅ The greatest cycling champion of all time
Watch the video of his accomplishments for cycling
📺 https://t.co/b3QIRtxMpQ#InnsbruckTirol2018 pic.twitter.com/QVJOECqkwU

UCI Athletes’ Commission President Katerina Nash was co-opted as a member of the Management Committee following approval being given by the Congress.

The Congress confirmed their approval to World Championships awarded yesterday, reforms to men’s and women’s professional road cycling, as well as Saint-Quentin-en-Yvelines in France and Vancouver in Canada being awarded the UCI Bike City label.

The Congress awarded the UCI Merit, a distinction in recognition in principle of people demonstrating an outstanding commitment to cycling, to several individuals.

The great Belgian cyclist Eddy Merckx was among the recipients, along with Hadja Aminata Mara, José Luis López Cerrón and Chayol Koo.

The Tour de France was also named as a winner of the UCI Merit.

The German, a two-time Olympic champion, was left paralysed following a crash in training earlier this year.