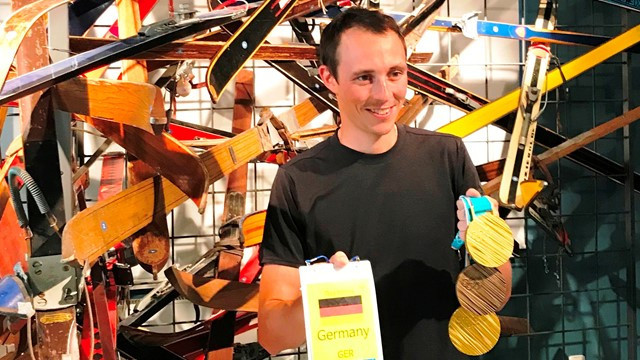 An exhibit featuring German Nordic combined star Eric Frenzel has been extended at a museum in Oberwiesenthal.

Frenzel, the three-time Olympic champion, has donated further items to add to the collection at the Wiesenthaler K3 museum.

The 29-year-old has added his three Olympic gold medals, while 12 of his World Championship medals are also stored there.

Frenzel also donated his accreditation from the Opening Ceremony of the 2018 Winter Olympic Games in Pyeongchang, where he was the flagbearer for the German team.

He also added his accreditation from the Closing Ceremony.

The items join one of his International Ski Federation World Cup crystal globes and the first Nordic combined triple trophy in the exhibition.

The museum features a collection dedicated to successful athletes to have come from Oberwiesenthal and features the medals they have claimed at major events.

The exhibition was first opened in 2014, with Frenzel among the star names represented.

Frenzel recently confirmed that he is switching back to his childhood club SSV Geyer.

He has been representing WSC Erzgebirge Oberwiesenthal but now wants to give something back to the place where it all started.