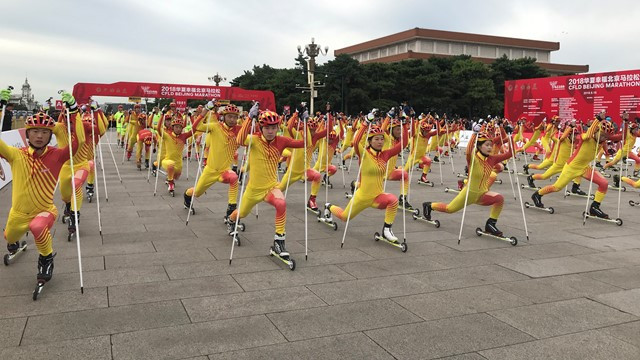 One hundred roller skiers led the start of the Beijing Marathon as part of a campaign to promote winter sport in the 2022 Winter Olympics host city.

The skiers paced the race, in which 30,000 runners took part, for the first four kilometres.

The stunt was arranged as a bid to get more people into cross-country skiing and snow-sports in general, with the Chinese capital set to host the Winter Olympic and Paralympic Games in four years' time.

It is not the first initiative introduced as part of a bid to get more locals into winter sports.

Earlier this month the International Ski Federation (FIS), its education entity the FIS Academy and the Chinese Ski Association announced plans to launch a "Get into Snow Sports China" grassroots programme (GISS).

It is hoped the scheme will help the Government meet their target of 300 million new winter sport participants as a result of the 2022 Games.

The programme will engage snow sports beginners through interactive ski and snowboard courses that are delivered by specially trained GISS-China ski instructors with a focus on safety, while being fun for the participants.

The Chinese capital also hosted the 2018 World Winter Sports Expo, the total number of visitors for which is expected to exceed 150,000, as another way of promoting winter sport in the city.