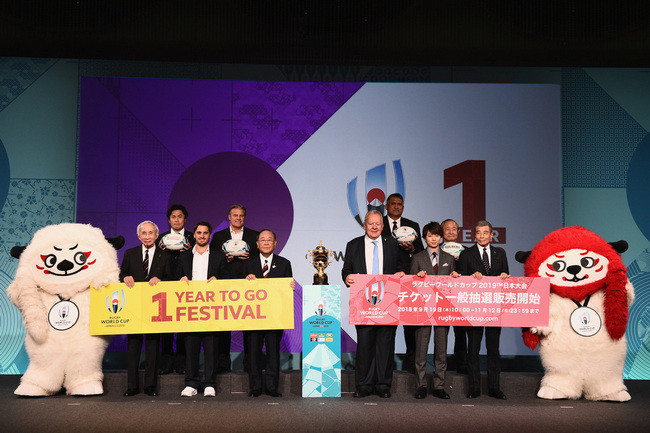 Celebrations are taking place across Japan to mark the one-year milestone to their hosting of the 2019 Rugby World Cup, and Bill Beaumont, World Rugby’s chairman, predicted at a special ceremony in Tokyo that the event would be "the most impactful ever".

They were joined by chairman of the Japan Rugby Football Union Tadashi Okamura.

Also in attendance were chairman of the Fujio Mitarai and Akira Shimazu, chairman and chief executive respectively of Japan 2019.

Beaumont, a member of the World Rugby Council that chose Japan as hosts nine years ago, commented: "World Rugby selected Japan as we believed in the tremendous opportunity to further the sport across Asia.

"And I am delighted to say that, with a year to go, we are confident that Japan 2019 will be a very special, successful and game-changing Rugby World Cup.

"It will be the most impactful Rugby World Cup ever, attracting and retaining more than one million new rugby players in Asia, while changing the lives of thousands of disadvantaged children in communities across Asia thanks to the generosity of fans supporting our transformational partnership with ChildFund Pass It Back.

"Japan 2019 will also benefit the whole of the nation from Sapporo in the north to Kumamoto in the south, delivering rugby and sports facilities for communities to enjoy…

"The team camp and match venue facilities are looking superb and everyone will receive an incredible welcome.

"However, there can be no sense of complacency and we have a big year ahead as we begin operational readiness testing and urge everyone to keep the strong momentum going."

Converting the opportunity of the first Rugby World Cup hosted in Asia has been a major priority for World Rugby and the Japan Rugby Football Union, and Beaumont was able to announce that the Asia 1 Million project is 90 per cent of its way to achieving the target of one million new players in Asia.

A total of 899,000 new participants have been gained to date, while more than 1,900 schools across Japan have introduced tag rugby to their sports.

So far, 19 of the 20 participating teams have been confirmed with Canada, Hong Kong, Germany and Kenya set to compete for the final available place via the repechage in Marseille in November 2018.

The appointment of Japan’s leading sports broadcasters as rights-holders will ensure that the tournament has the widest-possible audience reach in a nation that has a population of 127 million.

In total, 31 matches will be on-free-to-air broadcast, including the opening match between Japan and Russia on September 20, the final on November 2 and all of Japan’s matches.

It is anticipated that the domestic market will return figures that will smash records set at Rugby World Cup 2015 where Japan enjoyed their best-ever campaign.

At England 2015, the cumulative audience across Japan increased by 59 million from 2011, delivering a record rugby audience of 25 million viewers for Japan's match against Samoa.

The total 15-minute reach was a record 31 million.

"Rugby World Cup 2015 set new standards of rugby broadcast innovation and delivery, providing fans in a record number of nations with every unforgettable moment from the most compelling and competitive tournament to date," Beaumont added.

"We are excited about this deal for the Japanese rights, not just because it ensures that the nation’s top sports broadcasters are involved, but that with a strong free-to-air component it will guarantee the biggest domestic broadcast footprint for a Rugby World Cup and therefore what is likely to be a record audience."