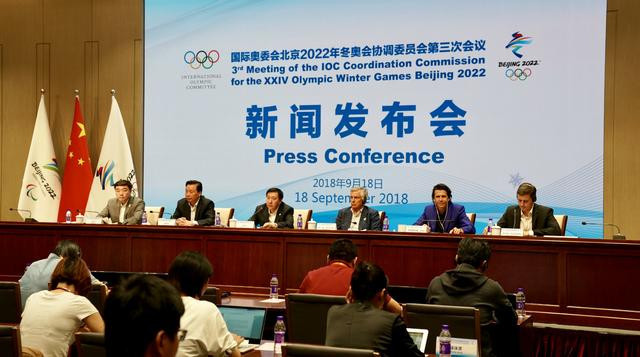 Beijing 2022 vice-president Yang Shu'an has admitted there is no guarantee of Chinese medal success at their home Winter Olympics in four years time as International Olympic Committee (IOC) officials praised their progress towards staging the event.

The official stated the country and the Chinese Olympic Committee (COC) were investing to ensure the hosts are competitive at the Games.

Yang expressed his hope that China can celebrate breakthrough performances in events in which the country has had little pedigree to date.

"China is not a strong country in terms of winter sports, that is a fact," he said.

"COC have been accelerating our competitiveness in winter sport to help satisfy the audience.

"Our Winter Sports Centre released the outlines to help the teams to train, as well as to encourage 300 million people to take to the ice and snow.

"We hope our team can participate in all events and make breakthroughs.

"No-one can be sure we will have a great performance."

Short track has proved China's most successful winter sport by far at the Winter Olympics, with 10 of their 13 gold medals coming in the discipline.

Freestyle skiing, speed skating and figure skating have accounted for their other golds.

Snowboarding and curling are the only other events to have seen China earn medals, with the country boasting no previous success in Alpine and cross-country skiing, biathlon, Nordic combined, bobsleigh, skeleton, luge, ski jumping or ice hockey.

A key part of the Beijing 2022 bid was the pledge to help encourage 300 million people to participate in snow sports.

Organisers hope the Games could help produce the next generation of athletes, who could ultimately achieve success in a wider range of winter sports.

Christophe Dubi, the IOC's executive director for the Olympic Games, claimed the ambition could benefit the entire winter sport movement.

"This is where we need a collaboration outside of the IOC," he said.

"They have rightly pointed to the need to have results and participation across the events, because it could stimulate the youngsters to practice the sport.

"International Federations have to be involved as well, with their development programme to promote their sport to the next generation.

"The industry also has a role to promote winter sport in China.

"The bid committee had a big ambition and it is one we have all embraced.

"And we will succeed."

While Chinese medal success is not guaranteed, organisers remain confident of hosting a successful edition of the Games.

Beijing will become the first city to host a Summer and Winter Olympics after holidng the former back in 2008.

"Beijing 2022 continue to make very significant progress in the planning of the Games," he said.

"We are very comfortable, we are extremely confident in the work that is being done.

"What we are trying to do is impress the world together with Beijing 2022 by being very adept, using every resource, be that human, money or nature, very efficiently.

"That is what we want to impress the world with, that is intelligent."