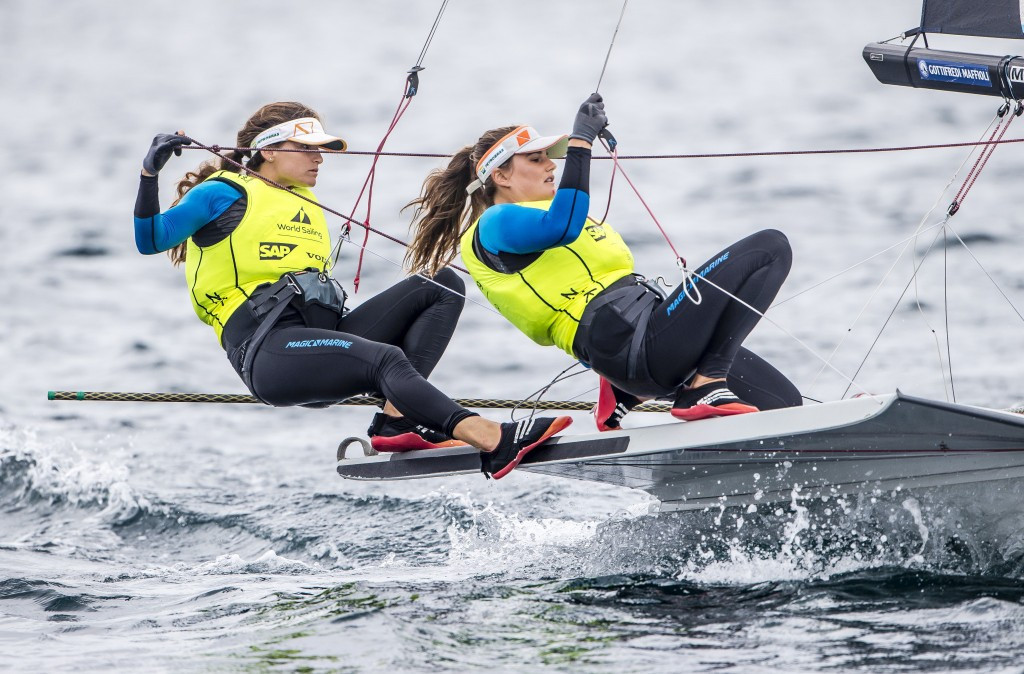 Racing continued at the Tokyo 2020 venue in the Sailing World Cup series, which boasts a field of 35 Olympic medallists, with the Brazilian Olympic champions leading the 49erFX competition.

Grael and Kunze won the opening race and added wins from race four and five.

The Brazilian pair are leading the field on a net total of ten points with New Zealanders Alex Maloney and Molly Meech in second.

Maloney and Meech beat the Brazilians in race three to pick up their first race win of the competition, but slipped to 12th in the final race of today, number six.

Grael took time out of the Olympic discipline to sail in the Volvo Ocean Race and competes in Tokyo at her second 49erFX event in 14 months, but Maloney welcomed her back.

"It's good to have them [Grael and Kunze] back in the fleet and I think it just lifts the standard of racing," said Maloney.

"They're sailing well and it's just great to have them out on the race course again.

"It's so up and down in the fleet.

"No matter who you are out there with, you have to be pushing it and making the right decisions.

"It's been pretty cool being at the Olympic venue with interesting racing conditions, but so far we've raced well."

The New Zealanders' tally of 22 points puts them 12 points down on the Brazilians and on equal points with the British team in third place.

Charlotte Dobson and Saskia Tidey had their best race finish so far in race one, finishing third, but a string of consistent top six places in the following four races has kept them in the top three.

There are two more days of racing for the 49erFX fleet before medal races get underway on Saturday (September 15).

Although Fletcher-Scott and Bithell have finished ahead of their compatriots in four of six races, it's Peters and Sterritt's consistency that gives them a two-point advantage.

Peters and Sterritt have 20 points, with Fletcher-Scott and Bithell on 22 after a 23rd place finish in race four.

"It's a good rivalry between us, as always," Peters said.

"We've been pushing, and they have been too.

"It helps us focus more in the competition and it's good for the country."

New Zealand's Logan Dunning Beck and Oscar Gunn are in third with 31 points.

Hanson won the last race of the day to secure the top spot, as Beckett could only manage ninth.

Australia's Matthew Wearn completes the top three with 19 points, the same as Beckett and only a point behind Hanson.

A point separates her from second placed Marit Bouwmeester of The Netheralnds with 11 points.

Sweden's Josefin Olsson and Canada's Sarah Douglas are tied on 13 points at this stage.

In the 470 events, home advantage looks to be favouring the Japanese teams.

Keiju Okada and Jumpei Hokazona picked up a race win in race three to add to their two second place finishes and a fifth.

They lead the field on five points, with Australia's Matthew Belcher and William Ryan second on nine.

Tetsuya Isozaki and Akira Takayanagi are Japan's second hopefuls who are currently in third place with 16 points.

In the women's 470, The Netheralnds lead the field on nine points through the efforts of Afrodite Zegers and Anneloes van Veen.

Poland are second on 12 points thanks to sailors Agnieszka Skrzypulec and Jolanta Ogar.

Japan are represented in third, only two points down on the Poles, as Ai Kondo Yoshida and Miho Yoshioka added a second and 11th place finish to their race two win.