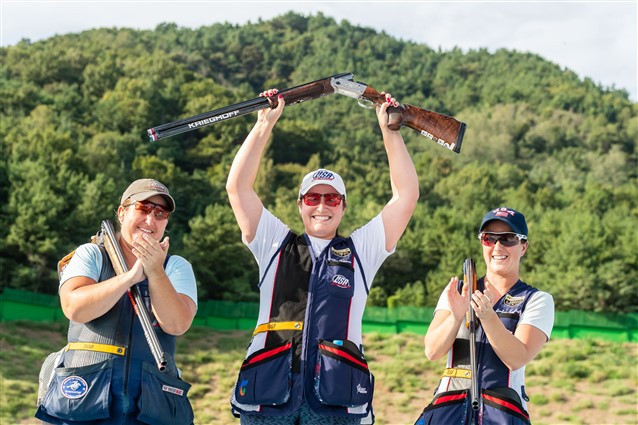 The United States dominated the women's skeet event at the International Shooting Sport Federation (ISSF) World Championships in Changwon, taking all three medals in the individual competition as well as the gold and world record in the team event.

Caitlin Connor won her first ISSF title and joins a long list of American shooters who have dominated this discipline.

Connor's title is the fourth consecutive World Championship women's skeet gold won by the US.

Kimberley Rhode and Amber English took silver and bronze, respectively, but only two Olympic quota places were gained as this is the maximum each nation can secure in South Korea.

Connor shot perfectly until the 34th target when she missed a couple at the Changwon International Shooting Centre.

With 20 clays to go in the match, only the three Americans were left in the competition, all tied on 37 hits.

English was the first to miss and was eliminated, taking the bronze medal on 46 hits.

Rhode took silver with 56 hits while Connor claimed gold with 57.

"I was a little nervous at first, but then I got into the groove and had fun shooting with my team-mates.

"It feels really good to have three US flags up there.

"I am glad it was us three.

The third and fourth Olympic quota places went to Slovakia and Russia.

In the team event, Connor, English and Rhode won gold for the US with a world record of 355 hits.

Sdruccioli had to avoid elimination in third place, thanks to India's Gurnihal Singh Garcha missing his final target at station five.

The 20-year-old Italian then faced American Nic Moschetti, who were tied on 46 with ten targets left.

Sdruccioli finished on 56 crushed targets whilst Moschetti missed his last one to finish on 55.

The bronze medal with to Garcha.

The Czech Republic won the team gold with 356 hits, followed by India with the silver medal on 355 and Italy in bronze with 354.

The 20-year-old Chinese shooter trailled by 5.1 points at the end of the prone series but bridged the gap and eventually took gold with 456.6 points.

France's Jade Bordet also trailed in the early rounds before she took the silver medal with a final score of 455.5 points.

The 17-year-old was seventh after the kneeling position but put in better performances in the standing and prone positions to claim silver.

The 20-year-old helped her country to team bronze with 3,458 points.

The US finished ahead of Russia in silver medal position with 3,461 points but China took the gold with 3,474 points.