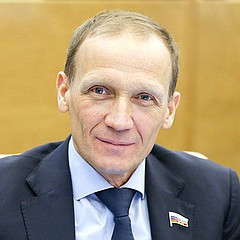 Russian Biathlon Union (RBU) President Vladimir Drachev has admitted "a number of countries" are opposed to the nation being reinstated as a full member of the International Biathlon Union (IBU) but claimed they had met all the required conditions.

The status of the RBU is on the agenda at the IBU Congress in Poreč in Croatia tomorrow, where the membership of the worldwide governing body will also elect a new President.

The RBU was relegated from full to provisional membership in December of last year as punishment for the nation's doping scandal.

It meant the RBU could not nominate candidates or vote at the Congress.

Reports had surfaced earlier today claiming the IBU had taken the RBU's membership off the agenda but a spokesperson for the organisation claimed his was not the case.

Drachev, elected RBU President earlier this year, also claimed the emergence of four new doping cases involving athletes from the nation should not be considered as they stem from between 2012 to 2014.

"There is certainly a chance for restoration, although there is little opposition from some countries, and we will try to eliminate it today," Drachev, a four-time world champion, told Russia's official state news agency TASS.

"We can not be punished twice for the same fault, we were not allowed to enter the Olympic Games practically with the whole team.

"It is simply indecent to punish several times for the same thing."

Tomorrow, 07 September 2018, the first day of sessions at the 13th Regular IBU Congress will take place. Key decisions such as votes on memberships and elections of President, First Vice President, Vice President Of Finances, Executive Board and Technical Committee will be made. pic.twitter.com/uIluc0iPzz

Broka has been forced to deny accusations of Russian interference in her campaign and has also been criticised for her supposed Nationalistic stance.

The election has turned sour in recent weeks after Dahlin, an IBU vice-president for development, told insidethegames he was aware of the rumours of Russia lobbying heavily for his opponent.

Dahlin's comments prompted Broka to accuse the Swede of "personal attacks" and running a "dirty campaign" for the top job.

Dahlin has come under fire for his links to the previous regime as he served as vice-president for four years under former President Anders Besseberg.

Bessberg stood down earlier this year after criminal prosecutors opened an investigation into the Norwegian and former secretary general Nicole Resch which focuses on possible doping, fraud and corruption.

Besseberg and Resch have been accused of accepting bribes amounting to $300,000 (£211,000/€243,000) and other benefits in return for a favourable stance towards Russia - but deny wrongdoing.

It is thought the Presidential vote will be much closer than initially anticipated and the two candidates have been involved in last-minute lobbying today.

They will also get the chance to present to the Congress tomorrow before the members cast their votes in an election considered vital to the sport's future.

Russian Alexander Tikhonov, the four-time Olympic champion who was due to represent Georgia at the Congress, had claimed he would file a motion for the membership to reject both candidates.

Tikhonov, sentenced to three years in prison following a conviction for conspiracy to commit murder in 2007 but who did not serve any jail time owing to an amnesty, said neither were suitable but has since confirmed he has not travelled to Croatia for the Congress.