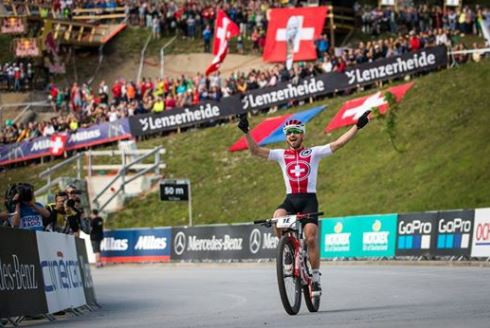 World champion Nino Schurter helped the host nation get off to a golden start on the opening day of the International Cycling Union (UCI) Mountain Bike World Championships in Switzerland as his last leg ride confirmed victory in the team relay event at Lenzerheide.

Schurter, who will seek to extend his record-breaking achievement to seven elite world titles in the cross-country Olympic category, took over from fellow world champion Jolanda Neff in company with Germany’s Manuel Fumic, with Australia’s final leg choice, junior women’s rider Zoe Cuthbert, in the lead.

Both men sprinted up the first climb and quickly caught Cuthbert.

Schurter, the world’s number one-ranked rider, then powered away from Fumic to give Switzerland their first win of the week in a time of 1hr exactly, 13 seconds ahead of the German team.

Denmark, who took silver in 2017, earned bronze this time.

This is the second year since the team relay increased to five riders from four, with the addition of the under-23 women's category to the existing elite women and elite men, under-23 men and junior men.

Each rider does a lap of the cross-country course, and countries can send the riders off in any order they wish, which can result in constant lead changes.

"It's crazy to win here in Lenzerheide, with the atmosphere in front of the home crowd," said Schurter, who only lives 20 minutes from the course.

"The course is quite technical and tricky after the rain we had, and that is what I like.

“We have world class riders all the way from the junior to the under-23 to the elite, so our goal was to win here at home.

“World Championships are always special, and the team relay is something different from what we usually do; you take part as a team and everybody needs to perform well, which is different for mountain bikers, but I really enjoyed it."