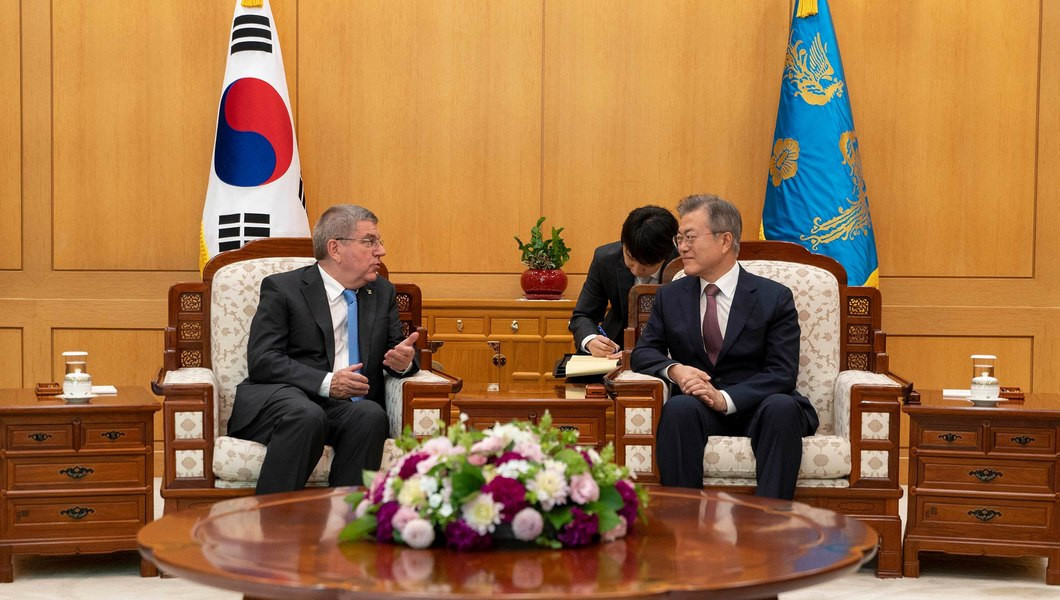 The IOC state the Olympic Order in Gold is the highest honour given by the organisation, with recipients considered to have “rendered outstanding service to the Olympic cause”.

President Moon received the honour at a ceremony at Blue House in Seoul, the official residence of the South Korean head of state.

"The award was given today in recognition of the invaluable role of President Moon in the great success of the Olympic Winter Games Pyeongchang 2018, which included the participation of athletes from the NOC of the Democratic People’s Republic of Korea,” the IOC stated.

Participation of the North Korean team and the joint march by athletes from the two Koreas at the Games were the culmination of a long process of negotiation and high-level government engagement by the organisation, which began in 2014, according to the IOC.

Bach claimed in an interview last week that the series of missile tests conducted by the North in the months before the Winter Olympics and Paralympics had prompted the IOC to consider cancelling the Games.

This was despite repeatedly stating publicly the event was always going to be held as planned despite the concerns.

Pyeongchang 2018 would have been the first edition of the Summer or Winter Games to be abandoned since the Second World War had the cancellation been necessary.

While the IOC have heaped praise on Moon for his role in ensuring the success of the Games and participation of North Korean athletes, the South Korean President reportedly offered similar praise to Bach.

"The reason for the success of the Games as 'Peace Olympics' is all down to you and to your leadership, and the great support of the IOC," President Moon said.

They were reported to have discussed the options for having joint teams, such as in mixed relay events and other joint activities during the next two editions of the Games in Tokyo and Beijing.

The ideas are aimed at finding further ways of contributing through to peace on the Korean Peninsula through sport.

Both reportedly agreed to continue these discussions at a working level, including with the two Korean National Olympic Committees.

The unified Korean team won a historic gold medal in the women’s 500m dragon boat race on Sunday (August 26), before winning bronze in the women's 200m and men’s 1,000m events.

Both North and South Korea also united during the World Team Table Tennis Championships in Halmstad in Sweden and have since competed together at other table tennis events.

Pyeongchang 2018 President Lee Hee-beom was awarded the Olympic Order in Gold after the Games in February.