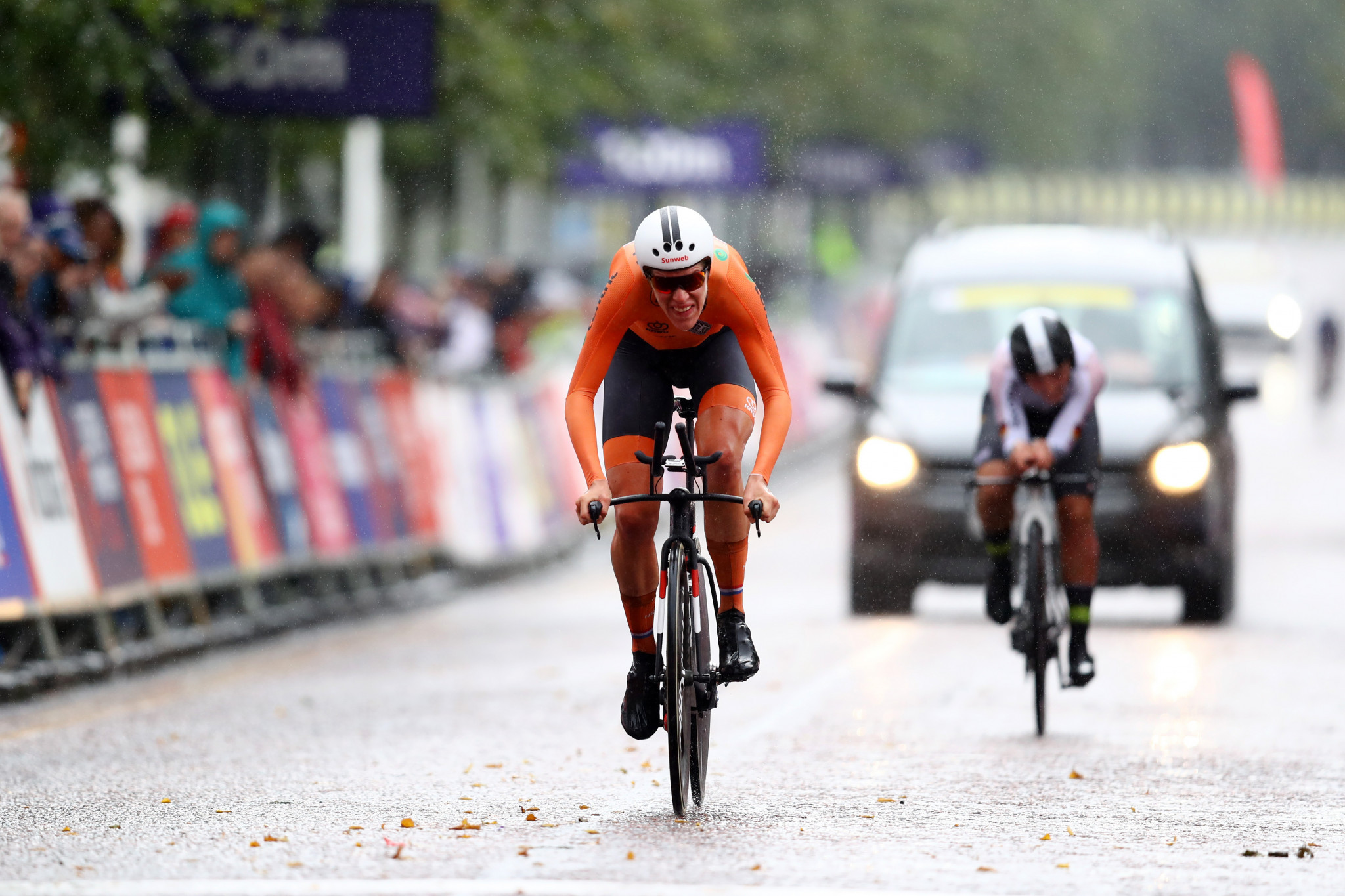 Heavy rain provided an added test for the riders on the 32.2 kilometre course, which made cornering challenging on the slippery roads.

The difficulties were immediately obvious, with riders rolling down the start ramp in a cautious manner.

As the defending champion, Van Dijk was the last to take to the course and she immediately showed her ability in the discipline as she caught and passed last year’s silver medallist Ann-Sophie Duyck of Belgium.

It quickly became clear the battle for the title would be between Van Dijk and Van der Breggen as the Dutch duo achieved the fastest times at the two checks on the course.

The pair were set a time of 42min 48sec to beat at the finish, which was set by Germany's Trixi Worrack.

Olympic road race champion Van der Breggen finished comfortably inside the time, as she crossed the line in 41:41 to guarantee the silver medal.

Van Dijk slipped on two occasions on the closing corners of the route to put her potential victory in doubt, but she stayed upright and would finish two seconds faster than her compatriot to earn a third straight gold.

It left Van der Breggen and Worrack settling for the silver and bronze medals respectively.

"It's an incredible thing if I think about it, I am super happy with that.

"I had no clue how close Anna was to me during the race.

"I felt pretty good, and it was a nice feeling to pass some of the other girls, but Anna is stronger then me normally so I had to give my all to the line and it seemed to be just enough.

"I don't mind so much if it rains or not, but when the road is wet there is a big difference.

"The corners are much more difficult when it's wet.

"My winning margin was only two seconds.

"It's a 32km course and I went round in just over 41 minutes, so that's just super close."

Campenaerts came through the opening time check of the race in 10th place, trailing the quickest time by 22 seconds.

The Belgian would time his effort to perfection as he emerged back into medal contention by the second check.

He looked to challenge the time set at the finish by Spain’s Jonathan Castroviejo, who appeared poised for gold by finishing in 53:39.41.

Campenaerts launched into a sprint finish in the closing kilometre with the Belgian edging his rival by just 0.67 seconds to take the gold for the second straight year.

Bronze was earned by Germany's Maximilian Schachmann, who achieved a time of 54:06.16.