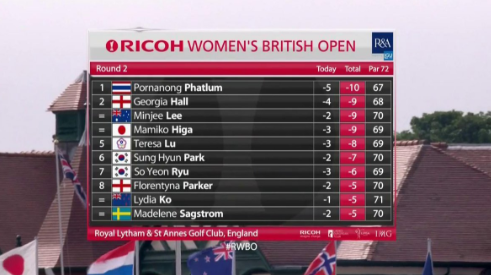 Thailand's Pornanong Phatlum ended the second day of play at the Womem’s British Open at Royal Lytham and St Annes as surprise halfway leader on a day made notable by a hole-in-one from Canada’s 20-year-old Brooke Henderson.

Phatlum, who has only made the cut on one of her previous seven appearances, matched her opening 67 with another five-under round to finish at ten under par in this Ladies Professional Golf Association championship at an event which is the fourth of this year's five women's majors.

Britain’s 22-year-old Georgia Hall is one of three players a shot behind.

Hall has not made a single bogey in her opening two rounds, carding a four-under 68 on Friday to go nine under.

One bounce and IN for @brookehenderson on the 9th! That's another £2,000 for @ARUKnews 🎉#RWBO pic.twitter.com/19GhKKQNm1

She is bidding to become only the third British winner since the event became a major championship in 2001.

Australia's Minjee Lee and Mamiko Higa of Japan are also on nine under.

Henderson’s flourish at the par-three ninth hole was the second ace of the week following the opening round effort by Britain's Florentyna Parker’s, and helped her to a position of equal eighth at five-under.