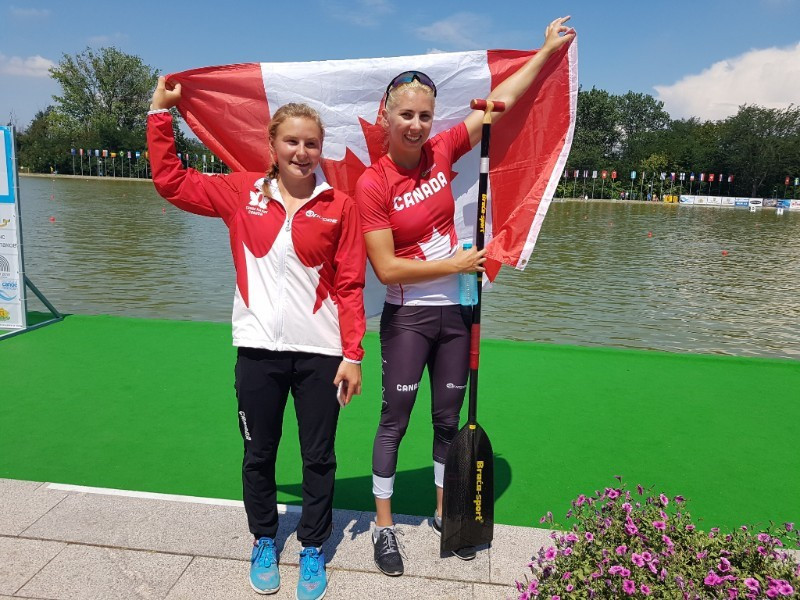 Canada's Katie Vincent and Sophia Jensen each won their second individual gold medals of the competition at the International Canoe Federation Under-23 and Junior Canoe Sprint World Championships in Bulgaria today.

Hungary and Lithuania also picked up two titles each today at the Regatta Course in Plovdiv.

Yesterday, Jensen and Vincent each won the C1 500 metres in the junior and under-23 their respective category and today they both took the C1 200m titles.

Vincent is perhaps better known for her exploits in the C2 senior ranks through her partnership with Laurence Vincent-Lapointe, but today admitted it is nice to show people what she can do individually.

"It’s always a new game every weekend, so to come out and execute the plan the way I wanted to and go home with two gold medals, I’m ecstatic now," the 22-year-old said.

Jensen, 16, meanwhile, said she used the experience of yesterday’s final to help her today.

"Yesterday considering it was the first A final, I was pretty stressed," she admitted

"Today it was more of, just go and do the same thing, just rip and have fun."

Korobov claimed afterwards he was not expecting the gold, having been focusing on the longer distances.

"I’m really surprised, because all of my training was much more towards the 1000," he said.

“I missed the start, and after yesterday’s 1000 I’m really tired and feeling a bit slow, so my second 100 metres was better than my first one."

Perhaps the biggest upset of the day came in the women’s under-23 K1 200m, where the defending champion Aimee Fisher from New Zealand could finish only seventh.

"It was an amazing race, I did what I could, and I’m really happy now," said Lucz.

"I was nervous. I’m always nervous before a race, but I think it is good for me."

The second gold medal for Hungary came from Alida Dora Gazbo, which was more expected.

She followed up her K4 500m gold from yesterday to take the junior K1 200m title today.

Tomorrow is due to be the final day of the competition.