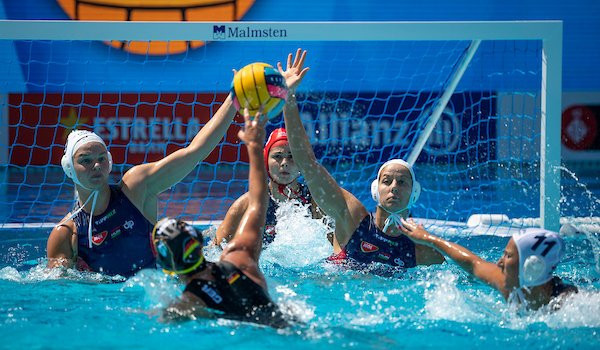 Quarter-final ties were the focus of the final day of group action at the women’s European Water Polo Championship in Barcelona today.

The top four teams in the two pools were decided heading into the final round of fixtures, but the last eight match-ups were yet to be confirmed with group positions still up for grabs.

Hosts Spain edged 12-11 to remain with a 100 per cent record after five matches at the Piscines Bernat Picornell.

The result ensured Russia finished in third place in Group B.

They ended behind Hungary, comfortable 26-1 winners against Germany.

Germany advanced in fourth place, despite their heavy defeat.

A top of the table clash saw The Netherlands hand Greece their first defeat of the tournament, after four straight wins.

The 8-7 victory saw the Dutch team top the Group A standings ahead of Greece, meaning they are due to face Germany in the last eight.

Italy finished third after they recorded an 11-3 with over France, now guaranteed to finish fourth.

France, however, face the daunting test of upsetting Spain in the quarter-finals, while Italy will meet Hungary.

Russia are now scheduled to take on Greece in their last eight match.

Already eliminated Croatia and Israel ended Group A with one point after they played out a 7-7 draw.

Serbia beat Turkey 9-6 to end fifth in Group B.

Serbia are now set to face Croatia in a ninth place playoff, while Israel and Turkey will play for 11th.

The men's tournament is due to resume tomorrow with the playoff round, where teams will bid to join Croatia, Italy, Spain and Serbia in the next stage.