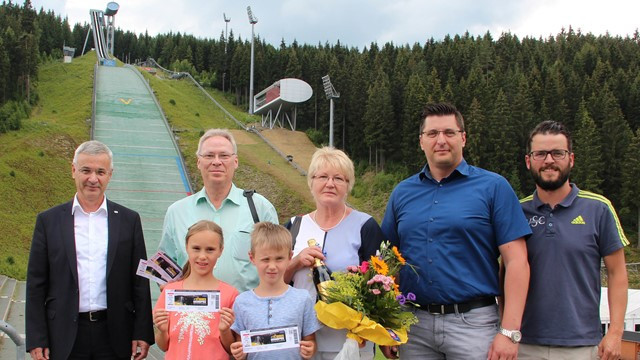 Klingenthal’s Vogtland Arena, the host of numerous ski jumping and Nordic combined competitions, has received its one millionth visitor.

He was the recipient of flowers, sparkling wine and VIP tickets for the men’s and women’s Ski Jumping Summer Grand Prix due to be held in the German town on October 3.

"This is such a nice surprise," Classe said.

"Our grandchildren like it here - they love to take the lift up to the in-run tower.

"We haven’t seen a ski jumping event yet and look forward to enjoy the Summer Grand Prix finals as VIP guests."

Keil, who also leads the Vogtland Tourism Association, added: "One million visitors is impressive, especially because most people are day visitors who come just to see the Arena.

"The Sparkasse Vogtland Arena has developed into the touristic and economic hotspot it was planned to be."

Another 50,000 people were drawn by company events or leisure sports events and about 600,000 were day guests coming to see the facility.

The "WieLi" lift and its wagons, transporting visitors, athletes and officials to the in-run tower, has been in operation for 24,514 hours, which is equivalent to 2.8 years.