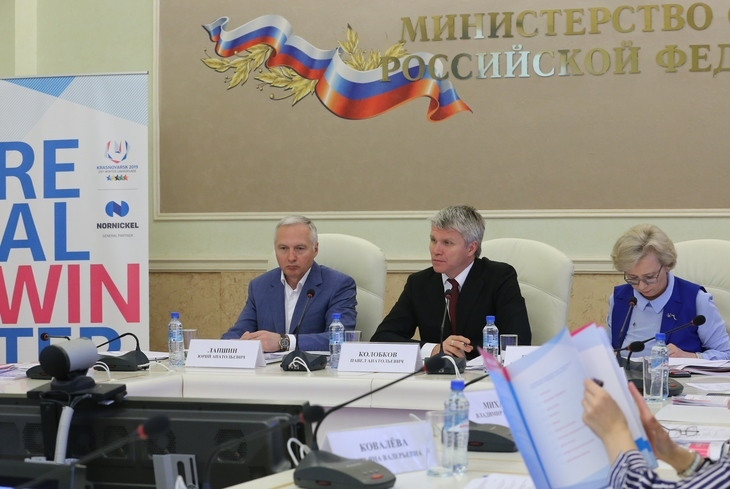 Russian Sports Minister Pavel Kolobkov has held a meeting with the Supervisory Board of the Krasnoyarsk 2019 Winter Universiade in Moscow.

Krasnoyarsk 2019 director general Maxim Urazov made a presentation on the intermediate results of preparations for the first half of the year.

Among those in attendance at the meeting were Natalya Parshikova, Russia's Deputy Sports Minister, and Yuri Lapshin, acting chairman of the Krasnoyarsk Government.

Also present were Sergey Alekseev, Acting Sports Minister of Krasnoyarsk, along with Russian Students Sport Union President Sergei Seyranov and other members of the Supervisory Board.

"In order to successfully conduct the competition, a new infrastructure is being created that meets all the requirements," Kolobkov said.

"We constantly monitor its readiness and it should be noted that the work is in the planning mode.

"In Krasnoyarsk, FISU (International University Sports Federation) experts who come regularly are satisfied with the pace and quality of preparation for the student Games."

At the beginning of the meeting, Lapshin said: "The Krasnoyarsk territory is actively preparing for the 2019 Winter Universiade and many activities are planned to prepare the capital of the student Games for the meeting of guests from different countries of the world."

Urazov revealed that 58 countries have now registered to compete at Krasnoyarsk 2019, scheduled to take place from March 2 to 12.

Work is also continuing in other areas of preparation.

"The medical plan for the 2019 Winter Universiade, an accreditation programme for participants and guests of the student Games, as well as draft scenarios for awards ceremonies for athletes have been approved," Urazov said.

Also discussed at the meeting was the Torch Relay for Krasnoyarsk 2019.

"In 17 regions of the Russian Federation and 13 settlements in the Krasnoyarsk territory, organisational committees have been set up to prepare and hold a relay race," Urazov said.

"The start of the relay race is scheduled for September of this year."